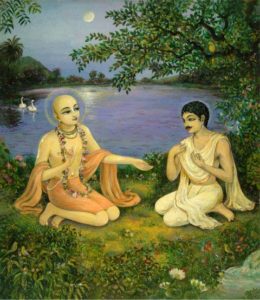 Someone asked me to make some consideration about violence in holy places. How come horrible things happen in a place that should be like a paradise?
In particular, why does it happen that young women are assaulted and raped?

I will say something from different points of view.

The first is from a material point of view.
For decades it has been said in all possible ways that ladies Vaisnavis, young or old, should not go around alone in Vrindavana or in India without a man accompanying them. Never be alone with a local and never go around in the evening or even during the day in isolated places.
There is no sufficient emphasis: Do not make this mistake. You could pay it dearly.

Second point.
There is the conviction that if one is born or lives in Vrindavana it must be a liberated soul from Goloka Vrindavana. It is not so.
Putana was in Vrindavana. Aghasura was in Vrindavana. Kamsa was born in Mathura. Bakasura, Kaliya, Aristasura and all the demons we read in the scriptures were all “Vrajavasi” and they killed so many men, women, children, cows, animals and vegetation. Just read the Sastra carefully and you will find this.
If someone would reply to me, but those were lilas, I would answer, then you could take the rape of a young girl as lila. How do we know it’s not like that?
Even today in Vrindavana there are so many demons. Just like, lila or not lila, Krishna exiled Kaliya, in the same way we must exile our stupidity to put ourselves in dangerous situations.
Give mental respect to any Vrajavasi, not being able to know if they are bhaktas or raksasas, is another thing. Mentally respect them, you do not trust them externally.

Now the philosophy.
I will tell (very shortly) two stories that make us understand how a Vaisnava should think. If we put on dhoti and saris but we continue to think like Europeans, Americans, Africans or Asians, then what we are doing will be very little useful for spiritual advancement. We must think like Vaisnavas philosphers. History and philosophy teach us how a Vaisnava thinks and sees reality.

First story:
Kamsa kills one by one the first six newborn children of Devaki and Vasudeva.
Think about it: this big big demon who grabs a cute and tender baby and throws it to the floor breaking all his bones. If they were making a film we would have to shed a lot of tears, and humanly it was not wrong to cry on it.
But Srimad-Bhagavatam says that the first six sons of Devaki were, in the previous life, sons of Hiranyakasipu and were six asuras.
Knowing this, the tears settle down and thinking of those six as big and bad men, with beards and mustaches brandishing swords and axes and children of one of the greatest demons in history, our mind calms down. It is no longer worth weeping over it.

Second story.
Ganga kills the first seven sons, hers and of King Santanu.
Imagine the scene. A beautiful baby is born tender and beautiful, the mother takes it and throws it into the river. Not one, but seven of them die like that.
All of us, together with Maharaja Santanu, feel anger against Ganga and shed abundant tears. It’s not right. It is sadism, infinite cruelty. What mother is that? What woman is that? What human being is that?
Then it becomes known that those seven babies were the incarnation of the eight Vasus (who are a type of celestial being). They had been cursed by Vasistha Muni to be born in this world for stealing his Nandini cow.
They do not want to be in planet Earth, because life in the heavenly planets is way much better and they pray the sage to be merciful and to withdraw the curse.
At the end of a long story Vasistha tells them that only the one who has physically taken the cow will stay on this planet for a long time and that the other seven will be able to return immediately after birth to their natural home. The eighth Vasu, named Prabhasa, will live a long time, respected and revered, on Earth as Bhishmadeva, one of the greatest Vedic authorities. Ganga agreed to play the part of his cruel mother.
Now, knowing that the seven babies could not wait to be thrown into the river to go back home, all the tears and sobs stop and we think, well then it was not so bad.

A note: those of you now think that this philosophy justify or rationalize violence did not understand anything of what I am saying.

Philosophy and history are a way of being, of thinking. Let’s study them so that they become one with our way of thinking.

And so,
1) Be wise, do not put yourself in danger,
2) Do not think in a sentimental way that those who live in Vrindavana are all saints,
3) the soul is eternal and often has a load of karma to pay.