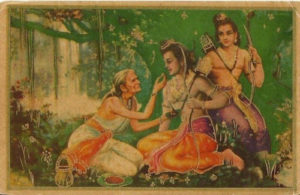 She grew up in a nishada family, and it was the day before her marriage, her father having brought thousands of goats and sheep to be sacrificed for her wedding. With compassion and sadness in her heart, not being able to bear to see the slaughter of those animals the young woman ran away into the forest and stayed.

She went to many rsis and asked them to accept her as their disciple and teach her true knowledge, but all of the rsis rejected her considering her unworthy to become their disciple because of her being of lower caste.

Not giving up in her determination the young girl was accepted by Matanga Rsi who immediately accepted her as his daughter and welcomed her into his ashram. He engaged Sabari in the service of taking the ashram cows to the pastures and seeing to the cleaning of the ashram, despite the criticism of the other rsis for his “accepting a lowly, nishada outcaste,” the rsis now considering and criticising Matanga Rsi to be fallen and impure for his having accepted Sabari as his disciple.

When Matanga Rsi knew he was going to depart this realm, he called his disciple Shabari, and said “My daughter, I’m going to leave this body. Is there anything that I can give to you?” Sabari prayed “My dear Lord and Master, I beg that you take me with you wherever you are going. I cannot live without you.”

Matanga instructed, “My dear daughter, one day Lord Rama is going to come to this ashram. I want that you stay here and welcome Him when He will come. Remain here until then, and after that you will come to me.”

Sabari remained in the ashram in continuance of her service, despite the other disciples leaving, she waiting for the day her Lord Rama would come. After cleaning the ashram she would go to the forest to collect the berries to serve Lord Rama in case He would come that day. Every day Sabari would do this, day after day, year after year never knowing when Lord Rama would come, her faith that He would, because her beloved Guru, Matana Rsi told her that He would.

Near Matanga Rsi’s ashram there was a beautiful lake where Sabari would go to collect water. As was usual, Sabari who was now very old went to the lake with her clay pot to collect water. On this particular day there was an older rsi sitting there reciting mantras, his becoming disgusted when he saw Sabari taking water from the lake, his thinking, “Now this low nishida woman has made the water impure. How can we use it now?,” and in his disgust, he threw a stone at Shabari. The stone hit Shabari’s leg and blood came, some of her blood falling into the lake. Within seconds all the water in the lake turned into blood. The rsi started shouting loudly, “Look, this outcaste’s blood has turned the whole lake into blood. What should we do now?”
Sabari went to her Ashram with filled water pot, leg badly hurt, her crying with the pain. Now the rsis had no water to drink or to use for their pujas. They chanted purification mantras, performed yajnas, even brought water from the Ganga and Yamuna to try to purify the lake, but to no avail.

One of the rsis suggested, “Lord Rama is in the forest. Let’s go to Him and ask His help to turn this lake of blood into water again.”

Upon their request, Lord Rama came to the lake of blood, the rsis all standing around him, the Lord asking, “How can I serve you?”

The rsis asked, “Lord, please place Your feet into this lack to purify it so that the blood will become water.”
Lord Rama walked into the lake but the lake remained as is, the rsis then asking that Lord Ram take bath in the lake, which He did, but still the lake remained as blood.
Lord Ramacandra then asked the rsis, “How did this lake become blood?,” one of the rsis explaining how another rsi had thrown a stone at a nishida female who had become a disciple of Matanga Rsi, who was named Shabari; that in her leg being pierced by the stone, some of her blood had fallen into the lake and turned all the water into blood.

In hearing Shabari’s name Lord Ramacandra placed His hands on His heart and said “Oh rsis, the blood that was spilled was not Shabari’s blood, but that from My very Own heart. This blood, I’m not able to clean.” The rsis then asked, “Our life has become very difficult. We are not to continue to live without this water. Please help us.” Lord Rama the, replied, “I have come to see Shabari. Please immediately bring her to Me.”

Sabari in being told her Lord Rama had come, came running to see Her beloved Lord. The rsis thinking the “impure” shadow of Shabari’s body should not touch the Lord, tried to stop her from going near Lord Rama, yet in her hastily running, the dust from her feet fell into the water, the blood then turning back into water. The rsis were shocked and asking among themselves “What has happened? What’s happened?”

Lord Rama then explained “Don’t you see that the dust from Shabari’s feet has purified the lake?” I placed my feet into the lake and bathed in it, but nothing changed. The dust from the feet of My pure devotee has purified this lake.“

Sabari prayed to Lord Ramacandra, “My Lord, You please come to my ashram. I have been waiting for You. I have decorated it with flowers for You, and I have brought sweet berries for You. I beg My Lord that you please come.”

Rama and Laksman followed her to her dwelling where Sabari brought them sweet berries in a bowl made of leaves. Rama was pleased with faith of Sabari in her guru, Matanga Rsi, and the loving service Sabari had rendered in her love and faith in Him, Lord Rama. Sabari explained, “My Lord, sometimes the berries in this forest are sweet, but some sour, so I have selected only the sweet berries for you. This I have done by tasting every berry to make sure I have only brought the sweetest berries for you. My Lord, please accept these berries.”

Lord Rama looking at His beloved devotee, Shabari, went to take a berry, but Laksman stopped Him, saying, “Bhaya, these berries have been tasted. You can not eat these.” Lord Rama took a berry, ate it, and said to Laksman “My dear brother, Laksman, these berries are so very sweet. I’ve never tasted berries as sweet as the berries Sabari has given to Me. When one offers something to me in love, I accept it with great joy.”

Rama, touched by her love, and seeing the tree from which Sabari had use the leaves to make the bowls, blessed the tree that its leaves would naturally grow to become like bowls. Rama then asked His devotee, “Ask me for anything that you wish, I’m pleased by your devotion.”

May the blessings of the Lord’s beloved devotees be upon us, that we obtain the ultimate in love, Krsna Prema.