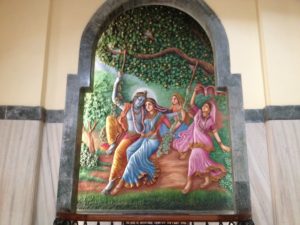 Bhaimi or Jaya Ekadasi:
It is said that if one observes upavasa on this day then one receives entrance to Visnu’s abode, even though one has not performed the other vratas of the year.

NOTE: The half day fast (vrata) for the appearance of Lord Varahadev is also observed on this Ekaadasii day, and the utsav (festival celebration – pujas and feasting, etc.) is oserved on the Dvaadasii, which is when He appeared.

JayA EkAdasii from the Bhavishya-uttara Purana.

“My Lord, You have so kindly explained to me the auspicious day known as Sat-tilA EkAdasi, which occurs during the dark fortnight (krishna paksha) of the month of MAgha (January – February). Now please explain to me the EkAdasii that occurs in the light fortnight (shukla or Gaura paksha) of this month. By what name is it known, and what is the process for observing it? Who is the presiding Deity that is to be worshipped on this sublime day, which is so very dear to You?

Lord Sri Krishna replied, “Oh Yudhisthira, I shall gladly tell you about the EkAdasii that occurs during the light half of this month of MAgha. This EkAdasii obliterates all kinds of sinful reactions and demoniac influences that may be affecting the spirit soul. It is known as JayA Ekaadasii, and the fortunate soul who observes a fast on this sacred day is relieved of the great burden of ghostly existence. Thus there is no better Ekaadasii than this, for it truly bestows freedom from birth and death. It is to be honoured very carefully and diligently. So I as you to listen to Me very attentively, Oh Pandava, as I explain a wonderful historic episode regarding this Ekaadasii, an episode that I have already related in the Padma Purana.

“Long, long ago in the heavenly planets, Lord Indra ruled his celestial kingdom very nicely, and all the devas (demigods) living there were very happy and content. In Nandana Forest, which was beautifully graced with Parijata Flowers, Indra drank ambrosia whenever he liked and enjoyed the service of fifty million celestial maidens, the Apsaras, who danced in ecstasy for his pleasure.

“Many singers, led by Pushpadanta, sang in sweet voices beyond compare. Chitrasena, Indra’s chief musician was there in the company of his wife MAlini and his handsome son MAlyavAn. An Apsara named Pushpavati became very much attracted to MAlyavAn; indeed Cupid’s sharp arrows pierced the core of her heart. Her beautiful body and complexion, along with the enchanting movements of her eyebrows, captivated MAlayavAn.

“Oh King, listen as I describe the splendid beauty of Pushpavati: She has incomparably graceful arms with which to embrace a man like a fine silken noose; her face resembles the Moon; her lotus eyes reached almost to her lovely ears, which were adorned with wonderful and costly ear-rings; her thin, ornamented neck looked like a conch, having three lines; her waist was very slender, the size of a fist; her hips were broad, and her thighs like the trunks of banana trees; her naturally beautiful features were complemented by gorgeous ornaments and garments; her breasts were highly raised emphasizing her prime of youth; and to look upon her feet was to behold newly grown red lotuses.

“Seeing Pushpavati in all her heavenly beauty, MAlyavAn was bewitched at once. They had come with the other performers to please Lord Indra by singing and dancing enchantingly, but because they had become so enamored of each other, pierced through the heart by the arrows of Cupid, lust personified, they were utterly unable to sing or dance properly before the lord and master of the heavenly realms.

Their pronunciation was wrong and their rhythm careless. Lord Indra understood the source of the errors at once. Offended at the discord in the musical performance, he became very angry and screamed, “You useless fools! You pretend to sing for me while in a stupour of infatuation with each other! You are mocking me! I curse you both to suffer henceforth as pisAchas (hobgoblins). As husband and wife, go to the earthly regions and reap the reactions of your offenses.’

“Struck dumb by these harsh words, MAlyavAn and Pushpavati at once became morose and fell from the beautiful Nandana Forest in the kingdom of heaven to a Himalayan peak here on planet Earth.
Immeasurably distressed, and their celestial intelligence vastly diminished by the effects of lord Indra’s fierce curse, they lost their sense of taste and smell, and even their sense of touch. It was so cold and miserable high on the Himalayan wastes of snow and ice that they could not even enjoy the oblivion of sleep.

“Roaming aimlessly hither and thither in those harsh altitudes, MAlyavAn and Pushpavati suffered more and more, from one moment to the next. Even though they were situated in a cave, because of the snowfall and cold their teeth chattered ceaselessly, and their hair stood on end because of their fright and bewilderment.

“In this utterly desperate situation, MAlyavAn said to Pushpavati, ‘What abominable sins did we commit to have to suffer in these pisAcha bodies, in this impossible environment? This is absolutely hellish! Though hell is very ferocious, the suffering we are undergoing here is even more abominable. Therefore it is abundantly clear that one should never commit sins”.

“And so the forlorn lovers trudged onward in the snow and ice. By their great good fortune, however, it so happened that very day was the all auspicious JayA Ekaadasii, the Ekaadasii of the light fortnight of the month of MAgha. Because of their misery they neglected to drink any water, kill any game, or even eat whatever fruits and leaves were available at that altitude, they unknowingly observed Ekaadasii by fasting completely from all food and drink. Sunk in misery MAlyavAn and Pushpavati collapsed beneath a Pipal tree and did not even try to get up. The Sun had set by that time.

“The night was even colder and more miserable than the day. They shivered in the frigid snowfall as their teeth chattered in unison, and when they became numb, they embraced just to keep warm. Locked in each other’s arms, they could enjoy neither sleep nor sex. Thus they suffered through the whole night under the powerful curse of the deva Indra.

“ Still, Oh Yudhisthira, by the mercy of the fast they had by chance (unknowingly) observed on JayA EkAdasii, and because they had remained awake all night, they were blessed.

Please hear what happened on the next day. As DwAdasii dawned, MAlyavAn and Pushpavati had given up their demoniac forms and were once again beautiful heavenly beings wearing lustrous ornaments and exquisite garments. As they both looked at each other in amazement, a celestial airplane (vimana) arrived on the spot for them. A chorus of heavenly denizens sang their praises as the reformed couple stepped into the beautiful aircraft and proceeded directly to the heavenly regions, buoyed up by the good wishes of everyone. Soon MAlyavAn and Pushpavati arrived at AmarAvati, Lord Indra’s capital city, and then they immediately went before their lord (Indradev) and offered him their cheerful obeisances.

“Lord Indra was astonished to see that they had been transformed, restored to their original status and forms so soon after he had cursed them to suffer as demons far, far below his celestial kingdom. Indradev ask of them, ‘What extraordinary meritorious deeds have you performed so that you could give up your pisAcha bodies so quickly after I cursed you? Who released you from my irresistible curse?

“MAlyavAn replied, ‘Oh lord, it was by the extreme mercy of the Supreme Personality of Godhead, Lord Sri Krishna (VAsudeva) and also by the powerful influence of the JayA EkAdasii, that we were released from our suffering condition as pisAchas. This is the truth, Oh master: Because we executed devotional service to Lord Vishnu (even performed unknowingly – by ajnAta sukriti) by observing the day most dear to Him, we have happily been restored to our former status.”

“Indradev then said, ‘Because you served the Supreme Lord Sri Keshava by observing EkAdasii, you have become worshippable even by me, and I can see that you are now completely purified of sin. Whosoever engages in devotional service to Lord Sri Hari or Lord Shiva becomes praiseworthy and worshippable even by me. Of this there is no doubt.’ Lord Indradev then gave MAlyavAn and Pushpavati free rein to enjoy each other and wander about his heavenly planet as they wished.

“Therefore, Oh Maharaj Yudhisthira, one should strictly observe a fast on the sacred day of Lord Hari, especially on this JayA EkAdasii, which frees one from the sin of killing even a twice born brahmin. A great soul who observes this fast with full faith and devotion has in effect given all kinds of charity, performed all kinds of sacrifice, and bathed in all the Holy places of pilgrimage. Fasting on JayA EkAdasii qualifies one to reside in Vaikuntha and enjoy unending happiness for billions of yugas – indeed, forever as the soul is eternal. Oh great king, Lord Sri Krishna continued, one who even hears or reads these wonderful glories of JayA EkAdasii achieves the blessed merit attained by performing an Agnistoma fire sacrifice, during which the hymns from the Sama-veda are recited.”

Kandarpa: In the tenth chapter of the Bhagavad Gita (BG 10:28.) Lord Sri Krishna says, prajanash cAsmi kandarpah; “Of causes for procreation, I am Kandarpa”. The word Kandarpa also means “very beautiful”. Kandarpa appeared as Lord Krishna’s son Pradyumna in DwArakA.
Darpaka: This name indicates that Cupid can perceive what is to take place and prevent it from happening. Specifically, he tries to impede pure spiritual activity by alluring one’s mind and forcibly engaging one in material sense enjoyment.
Ananga: Once, when Cupid disturbed the meditation of Lord Shiva, that powerful deva (demigod) burned him (Cupid) to ashes. Still, Shiva gave Cupid the benediction that he would act in the world even without a physical body – like a ghost.
KAma: In Bhagavad Gita BG 7:11.) Lord Sri Krishna says, dharmAviruddho bhuteshu kAmo’smi: “I am sex life which is not contrary to religious principles.”
Pancha-sharaih: The five arrows with which Cupid pierces the mind of the living entities are taste, touch, sound, smell, and sight.
These are the five names of the empowered deva Cupid, who enchants all living entities and makes them do whatever he wants. Without receiving the mercy of Guru and Krishna one cannot resist his power.