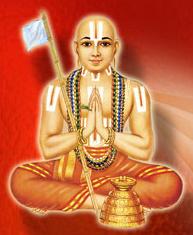 Ramanuja was born in 1017 c.e. to a brahmana family. His father was
Kesavacarya and his mother was Kantimati. This saintly couple, having gone
many years without a child, left their home in Bhutapuri, and traveled to
what is now the city of Madras on the Southeast Coast of India. There, as
tradition has it, at a Sri Partha-sarathi temple, they performed sacrifices
and prayed to God for a son, and about one year later Ramanuja was born,
and the family returned to the village of Bhutapuri.

It is significant that Kantimati, Ramanuja’s mother, had a brother
named Sailapurna who was an important disciple of Yamunacarya, the renowned leader of the Sri Vaisnava movement that was starting to grow around that time with its center at the great temple in Sri Rangam. In nearby Kanci lived Kancipurna, a highly respected Sri Vaisnava sadhu who had taken birth
in a sudra family. Tradition states that Ramanuja was at once attracted to
this man, who faithfully engaged in daily worship of the deity of Visnu,
Varadaraja. Ramanuja is said to have ignored the so-called low birth of
Kancipurna and welcomed him to his home, treating him with the veneration
due a respected guru. This then would have been Ramanuja’s second contact,
after his uncle, with the Sri Vaisnava sampradaya.

At the age of sixteen, Ramanuja’s father is said to have married
his son to an attractive brahmana girl. Tragically, however, one month
after the marriage Kesavacarya passed away, and the afflicted family left
the village of Bhutapuri and went to live in Kanci, where Ramanuja happily
increased his association with Kancipurna.

At Kanci, Ramanuja is reported to have entered the school of
Yadavaprakasa, a learned scholar of Sankara’s Vedanta. Ramanuja by this
time had apparently developed a substantial comprehension of the Sri
Vaisnava theology, and he was pained by the impersonal explanation of
brahman that he constantly heard at school. Indeed, tradition has it that
serious disputes arose between the guru and his bright, new student. This
deep disagreement broke out into the open over Yadavaprakasa’s explanation
of the verse from the Taittiriya Upanisad, satyam. jnanam anantam brahma. As
will be explained in far more detail later in this paper, the argument
centered on the issue of correlative predication of three qualities, namely
truth, knowledge, and infinity, to the Absolute Truth, Brahman. In accord
with the Sankara-sampradaya, Yadavaprakasa insisted that brahman simply is
truth, knowledge, and infinity, whereas the adolescent disciple, who was
destined to become the great philosophical foe of Sankara, insisted that in
fact truth, knowledge, and infinity were predicated of the Absolute in the
sense that the Absolute possessed those qualities, but that the Absolute
had its own identity.

According to several hagiographies, when Ramanuja proceeded to
write an eloquent commentary on this verse giving the Vaisnava explanation,
his teacher was disturbed beyond measure and saw the young boy as a great
potential great threat to his own career, and even to the impersonalist
sampradaya which he represented. Thus, tradition goes, the teacher plotted
to murder his disciple, and to carry out his plan, he organized a
pilgrimmage to Northern India with his students so that during the trip he
could arrange to kill Ramanuja. The plot failed, of course, and Ramanuja
returned safely to Kanci.
A short time later, Yamunacarya was about to leave this world in
the temple city of Sri Rangam, which was the headquarters of the Sri
Vaisnavas and he sent his trusted disciple, Mahapurna to fetch young
Ramanuja. It is said that previously during a visit to Kanci, Yamuna had
spied Ramanuja and had been very impressed with the boy’s appearence and
demeanor, but did not approach him as the young student was in the company
of his teacher, Yadavaprakasa. Clearly Yamuna must have also known about
Ramanuja through his disciple Sailapurna, who was Ramanuja’s uncle. In any
case, Ramanuja hurried with Mahapurna to Sri Rangam but arrived shortly
after Yamunacarya had passed away.

There is a well-known tradition that when Ramanuja approached the
body of Yamunacarya, which was lying in states, he noticed that three
fingers of the acarya’s right hand were still “folded and clenched tight.”
Ramanuja inquired from the disciples and they told him that the teacher did
not normally keep his hand closed in that way. Ramanuja then made three
vows to the acarya, and as he pronounced each of the three, one of the
teacher’s fingers relaxed and opened. The vows were: 1) to preach the
glories of Lord Visnu throughout the land of Bharata; 2) to write a full
Sri Vaisnava commentary on the Vedanta; and 3) to honor the father of
Vyasa, Parasara, for his teachings in the Visnu Purana by naming one
learned Vaisnava after him. We can not evaluate the historicity of this
story by modern means, but we shall mention in passing that this incident
is seen as a crucial, direct linking of Ramanuja with the previous acarya,
Yamuna. The idea is that in some way, Yamunacarya did not fully depart
until he had established a special and direct spiritual bond with Ramanuja.

The full biography of Ramanujacarya in Isvara Archive