What is your opinion on this video?

The main issues are:

Is the Gurvastakam (the samsara davanala song) intended for Srila Prabhupada?
Is it only for him?
Could disciples of other gurus meditate on their own spiritual masters while singing this song?

There may be different answers depending from several factors. One factor is the audience. If the audience is composed by neophyte devotees, or by devotees not having much interest in in-depth philosophical analysis the relevant and useful answers are simple:

1) Gurvastakam is for Srila Prabhupada since “Guru” is the main word of the song and he is diksa guru for many of his disciples still alive and siksa guru for everyone today and in the next thousands of years.

2) About meditating in other Gurus (refering to Srila Prabhupada disciples) I would suggest that they instruct their disciples not to meditate on them while singing Gurvastakam, unless they are sure to actually correspond to descriptions like
“sometimes his hair stands on end, he feels quivering in his body, and tears flow from his eyes like waves”
or
“he is expert in assisting the gopis, who at different times make different tasteful arrangements for the perfection of Radha and Krsna’s conjugal loving affairs within the groves of Vrndavana.”

So just meditate on Srila Prabhupada. Also you’ll avoid being yelled at from someone holding a microphone in his hands.

For those interested in in-depth philosophical analysis the question may be a little more complicated. 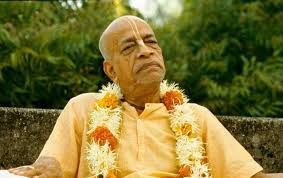 However the texts of the song make one wonder if Srila Visvanatha Cakravarti Thakura (who is Vinoda Manjari in Krishna-lila) was refering to some other class of Gurus in the spiritual world.

While most of the slokas of the song refer to very advanced preachers in Gaudiya line (the mahaprabhoh kirtana-nritya-gita verse clearly indicates Gaudiya Gurus), the verse #6, “nikunja-yuno rati-keli-siddhyai” refers to someone else, a Gopi’s assistant, namely a manjari. Since we don’t know what is Srila Prabhupada’s svarupa in Goloka Vrindavana, it would be licit having doubt meditating on him in his dress as a sannyasi assisting the gopis in Vrindavana, which would be a case of rasabhasa. Personally I meditate on Srila Prabhupada seated on a vyasasana instructing us. This is how I saw him and this is how I am forever going to remember him.

As a matter of fact, if we assume that Gurvastakam is for Srila Prabhupada, then we assume that he is a manjari. In terms of his spiritual advancement, it could very well be, but we are in no position to say that.

What if Srila Prabhupada is not a manjari but someone else in Krishnaloka? If he is not a manjari, we cannot meditate on him assisting the Gopis or it would be a case of mithyamati, a sentimental falsity.

Actually this debate didn’t begin few years ago with the sannyasi in the video saying “Gurvastakam is for all the gurus”, to which I already stated my objection. I remember to hear senior godbrothers discussing about this as early as in 70s. Some wondered how come a founding acarya who called his movement “Hare Krishna” and not “the Prabhupada Movement” wanted 2 daily guru-pujas? Isn’t enough the one where we chant “Guru Vandana (sri guru carana padma)”?

In my very humble personal opinion Gurvastakam is a highly rasa-like song in the Vrindavana mood, as it also appears clear in the verse sri-radhika-madhavayor apara-madhurya-lila guna-rupa-namnam, as well as in the already mentioned nikunja-yuno rati-keli-siddhyai verse.

Therefore an advanced devotee could think of Vrindavana, Krishna, Radharani, the Gopis and the manjaris when singing Gurvastakam.

That is a song for all Gurus.

It’s a philosophical tattva-like song describing the qualities of a spiritual master and of what a disciple should be. It is a very proper song to be sung to all bonafide Gurus. When I sing Guru Vandana I think of Srila Prabhupada without my attention being diverted.

Also the individual Guru pranama mantras are very proper songs to sing and recite for all spiritual masters because they are descriptions of their real and evident qualities.

Read Srila Prabhupada’s pranama mantras: there he is. There we come to know why he is so dear to Krishna, we have his Guru Srila Bhaktisiddhanta Sarasvati Gosvami Maharaja, how he was instructed to preach in the western countries, we have his struggle against voidism and impersonalism (nirvisesa-sunyavada) and we come to know how to be his disciples, by giving obeisances and service (namaste).

A couple of short considerations to conclude: the idea that is not necessary to chant Srila Prabhupada pranama mantras during kirtana is absurd and equally unacceptable is the idea that we should be prohibited to chant the personal names of the Deities.