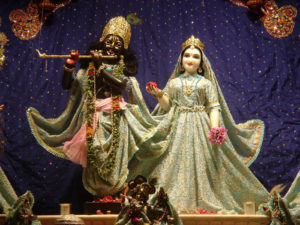 Introduction
smarantaḥ smārayantaś ca
mitho ‘ghaugha-haraṁ harim
bhaktyā samjātayā bhaktyā
bibhraty utpulakāṁ tanum
“When devotees discuss subjects dealing with the Supreme Lord, who can cleanse the heart of His devotee from all kinds of sinful reactions, they become overwhelmed with ecstasy and display different symptoms due to their devotional service.”
Śrīmad-Bhāgavatam (11.3.31)

The Bhāgavatam further states:
“Due to their spontaneous attachment for the Lord, when they chant His holy names they sometimes cry, sometimes laugh, dance, sing and so on, not caring for any social convention.”
(Srimad-Bhagavatam 11.2.40)

From these quotes we understand that in the world of Bhakti, or love for Krishna, there are vast treasures of emotions and happiness.
Bhava, which is the topic of this essay, is one of those.

Definition
The word bhava refers to a spiritual emotion within a transcendental loving relationship. It has nothing to do with material emotions. Nothing refering to matter can be called bhava.
Srila Rupa Gosvami makes clear what bhava is and how is arisen.

adau sraddha tatah sadhu-
sango ‘tha bhajana-kriya
tato ‘nartha-nivrttih syat
tato nistha rucis tatah
athasaktis tato bhavas
tatah premabhyudancati
sadhakanam ayam premnah
pradurbhave bhavet kramah
“In the beginning one must have a preliminary desire for self-realization.
This will bring one to the stage of trying to associate with persons who are spiritually elevated.
In the next stage one becomes initiated by an elevated spiritual master, and under his instruction the neophyte devotee begins the process of devotional service.
By execution of devotional service under the guidance of the spiritual master, one becomes free from all material attachment, attains steadiness in self-realization, and acquires a taste for hearing about the Supreme Personality of Godhead, Sri Krsna.
This taste leads one further forward to attachment for Krsna consciousness, which is matured in bhava, or the preliminary stage of transcendental love of God.
Real love for God is called prema, the highest perfectional stage of life.”
(Bhakti-rasamrta-sindhu 1.4.15-16)

The steps for spiritual advancement are here clearly outlined. Anyone who is interested in going back to Godhead should follow these directions.

Therefore bhava is the final stage before one reaches love of Godhead, prema.

Only for Madhurya?
Someone may ask,
“Is bhava a feeling reserved for those who are in madhurya-lila (a relationship as a lover) or in other rasas?”
Srila Prabhupada gives the answer.
“The word sarva-bhāva means that one can love the Supreme Personality of Godhead in different transcendental modes of mellows, beginning with dāsya, sakhya, vātsalya and mādhurya. In the śānta stage, one is on the border of loving service to the Lord.
Pure love of Godhead begins from dāsya and develops to sakhya, vātsalya and then mādhurya. Still, in any of these five mellows one can render loving service to the Supreme Lord. Since our main business is to love the Supreme Personality of Godhead, one can render service from any of the above-mentioned platforms of love.
(Srimad Bhagavatam 7.9.54, purport by Srila Prabhupada).

Therefore one will go through the stages outlined by Rupa Gosvami no matter if he is in dasya (servitorship) sakya (friendship), vatsalya (parental) or madhurya (as a lover).

Bhava and Anuraga
The difference between bhava and anuraga will be now explained.

“The loving propensity of the āśraya (devotee) toward the viṣaya (Lord) becomes so ecstatic that even after enjoying the company of the beloved, the devotee feels that his enjoyment is insufficient. At such a time, the lover sees the beloved in different ways. Such a development of ecstasy is called anurāga.
When anurāga reaches its highest limit and becomes perceivable in the body, it is called bhāva. When the bodily symptoms are not very distinct, however, the emotional state is still called anurāga, not bhāva.
When bhāva ecstasy is intensified, it is called mahā-bhāva. The symptoms of mahā-bhāva are visible only in the bodies of eternal associates like the gopīs.”
(Sri Caitanya Caritamrta 2.6.13 purport by Srila Prabhupada, quoting Śrīla Bhaktisiddhānta Sarasvatī who quotes Srila Rūpa Gosvāmī.)

Maha-bhava is here mentioned but we’ll deal with that topic some other time.

Srila Rupa Gosvami mnetions nine symptoms of Bhava Bhakti.
When bhakti is executed on the transcendental platform of pure goodness (suddha-sattva), it is like a sun-ray of love for Krishna. At such a time, bhakti causes the heart to be softened by various tastes, and one is then situated in bhava (ecstatic emotion).”
There are 9 symptoms of Bhava Bhakti:
“kshantir avyartha-kalatvam
viraktir mana-sunyata
asa-bandhah samutkantha
nama-gane sada rucih
asaktis tad-gunakhyane
pritis tad-vasati-sthale
ity-adayo ‘nubhavah syur
jata-bhavankure jane”
These nine symptoms can been seen in the character of one who has achieved the stage of bhava. These symptoms are seen as excellent criterion for determining advancement in bhakti, as opposed to other types of displays which may be easily imitated.

1) Kshanti: perseverance. Remaining tolerant and patient, even amid disturbance.

3) Virakti: detachment. Completely indifference to the objects of sense gratification.

4) Mana-shunyata: absence of false prestige or pridelessness. To feel humble, free from the longing for being shown respect.

5) Asha-bandha: hope. To be always certain that Krishna will bestow His mercy on oneself.

8) Asaktis tad-gunakhyane: A natural attachment to describe the Lord’s most sweet qualities, pastimes and so on.

9) Pritis tad-vasati-sthale: The desire to reside in the places of the Lord’s pastimes such as Vrindavan.
(Bhakti-rasamrita-sindhu 1.3.1)

Srila Prabhupada mentions 8 symptoms, which are:
“The bhāva stage is manifested by eight transcendental symptoms, namely
inertness,
perspiration,
standing of hairs on end,
failing in the voice,
trembling,
paleness of the body,
tears in the eyes and
finally trance.
The Nectar of Devotion, a summary study of Śrīla Rūpa Gosvāmī’s Bhakti-rasāmṛta-sindhu, explains those symptoms and vividly describes other transcendental developments, both in steady and accelerating manifestations.