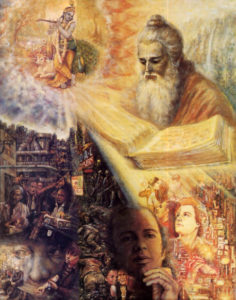 Synonyms
kṛṣṇe — in Kṛṣṇa’s; sva-dhāma — own abode; upagate — having returned; dharma — religion; jñāna — knowledge; ādibhiḥ — combined together; saha — along with; kalau — in the Kali-yuga; naṣṭa-dṛśām — of persons who have lost their sight; eṣaḥ — all these; purāṇa-arkaḥ — the Purāṇa which is brilliant like the sun; adhunā — just now; uditaḥ — has arisen.

Translation
This Bhāgavata Purāṇa is as brilliant as the sun, and it has arisen just after the departure of Lord Kṛṣṇa to His own abode, accompanied by religion, knowledge, etc. Persons who have lost their vision due to the dense darkness of ignorance in the Age of Kali shall get light from this Purāṇa.

Purport
Lord Śrī Kṛṣṇa has His eternal dhāma, or abode, where He eternally enjoys Himself with His eternal associates and paraphernalia. And His eternal abode is a manifestation of His internal energy, whereas the material world is a manifestation of His external energy. When He descends to the material world, He displays Himself with all paraphernalia in His internal potency, which is called ātma-māyā. In the Bhagavad-gītā the Lord says that He descends by His own potency (ātma-māyā). His form, name, fame, paraphernalia, abode, etc., are not, therefore, creations of matter. He descends to reclaim the fallen souls and to reestablish codes of religion which are directly enacted by Him. Except for God, no one can establish the principles of religion. Either He or a suitable person empowered by Him can dictate the codes of religion. Real religion means to know God, our relation with Him and our duties in relation with Him and to know ultimately our destination after leaving this material body. The conditioned souls, who are entrapped by the material energy, hardly know all these principles of life. Most of them are like animals engaged in eating, sleeping, fearing and mating. They are mostly engaged in sense enjoyment under the pretension of religiosity, knowledge or salvation. They are still more blind in the present age of quarrel, or Kali-yuga. In the Kali-yuga the population is just a royal edition of the animals. They have nothing to do with spiritual knowledge or godly religious life. They are so blind that they cannot see anything beyond the jurisdiction of the subtle mind, intelligence or ego, but they are very much proud of their advancement in knowledge, science and material prosperity. They can risk their lives to become a dog or hog just after leaving the present body, for they have completely lost sight of the ultimate aim of life. The Personality of Godhead, Śrī Kṛṣṇa, appeared before us just a little prior to the beginning of Kali-yuga, and He returned to His eternal home practically at the commencement of Kali-yuga. While He was present, He exhibited everything by His different activities. He spoke the Bhagavad-gītā specifically and eradicated all pretentious principles of religiosity. And prior to His departure from this material world, He empowered Śrī Vyāsadeva through Nārada to compile the messages of the Śrīmad-Bhāgavatam, and thus both the Bhagavad-gītā and the Śrīmad-Bhāgavatam are like torchbearers for the blind people of this age. In other words, if men in this Age of Kali want to see the real light of life, they must take to these two books only, and their aim of life will be fulfilled. Bhagavad-gītā is the preliminary study of the Bhāgavatam. And Śrīmad-Bhāgavatam is the summum bonum of life, Lord Śrī Kṛṣṇa personified. We must therefore accept Śrīmad-Bhāgavatam as the direct representation of Lord Kṛṣṇa. One who can see Śrīmad-Bhāgavatam can see also Lord Śrī Kṛṣṇa in person. They are identical.