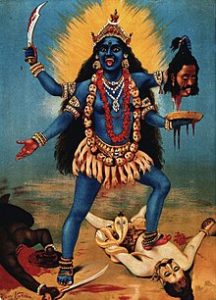 This particular divine form it’s not for love but to incite fear. Infact Kali Devi came for the destruction of demons.
The devotees of Kali worship her for their own protection and for the material advantages she easily grants.

I take advantage of this excellent question to say something more about Kali for the pleasure of history lovers. I know there are quite a few especially in the Dominican Republic.

What follows will be only a very few historical cues.
Those who want more can go to our Archive (www.isvara.org) and find over 20 pages of historical information about goddess Kali, the ones I managed to find in the various Puranas and Itihasas so far.
Once you are inside the Archive the path is:
history / personalities, others / PPP / Parvati

At the dawn of this creation, Brahma had many children, including Daksa. One of Daksa’s daughters was Sati, an incarnation of Mahamaya. She married Lord Siva.
Daksa did not like like Siva for some reasons told in the Puranas, and did not invite him to an important yajna he was organizing. Because of this Sati felt offended and abandoned her body so that he had no contact with a person who insults Siva.
Siva’s revenge resulted in Daksa being killed. Later he had another opportunity in another life.
You find this nice story in Srimad-Bhagavatam.

Following the threat of asuras like Taraka, Prasena, Jambha and Kalanemi, the Devas urged that Sati be reborn for their protection and be reunited with Siva.

As a result of that Himavan (the personality of the Himalaya) and his wife Mena had three daughters: Ragini, Kutila and Kali (which means pitch black). Brahma excluded that the first two were qualified enough to be Siva’s wives but he considered Kali qualified.

Kali had many names and expansions, each with names that have meanings and histories. For example she was called Parvati because she was the daughter of the king of the mountains; she was called Uma because when asked to stop performing austerities she refused saying “no” (“ma” means “no”).
Although her most known name is Parvati, her original name was Kali.

One day she had the impression that Siva didn’t like her black color so she did austerity to change it to a lighter color. Thus Kali obtained a white-gold colored body and she was called Gauri.

By the time Kali became Gauri, her skin got peeled off and fell to the ground and eventually this skin became Katyayani, born to destroy great demons like Mahisasura.
It is a very common picture in India to see Katyayani (Kali, or Parvati, it’s the same person) with one foot on a demon. That is Mahisasura conquered. The scariest pictures you see of Kali (like the ones you see here) is actually Katyayani killing demons.

There are some paintings with Kali defeating Siva Himself, but that is another story. 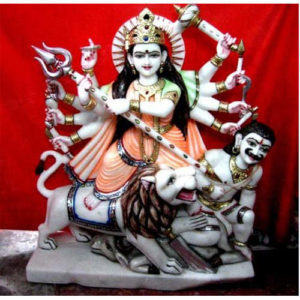 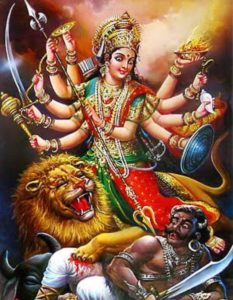