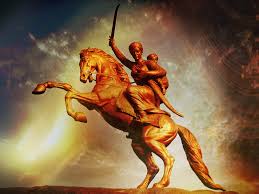 Haribol, Guru Maharaja, grant me your blessings and be at your lotus feet,

Maharaja, reading the meaning of verse 31 of chapter 2 of the Bhagavata Gita, says that “sometimes religious violence is a necessary factor”

With this point it would not be to validate what happened today in Sri Lanka where, for religious reasons, more than 200 people were robbed of their lives?

Are we not legitimizing terrorism with the excuse of using religion?

I would be very grateful if you would grant me light as you have done so far.

The Bhagavad-gita verse 2.31 that you mention says:

sva-dharmam api caveksya
na vikampitum arhasi
dharmyad dhi yuddhac chreyo ’nyat
ksatriyasya na vidyate
“Considering your specific duty as a ksatriya, you should know that there is no better engagement for you than fighting on religious principles; and so there is no need for hesitation.”

The context of this verse is the following:
the Pandavas were not only the rightful heir of the kingdom but by far more spiritually qualified to be in charge of a society. For this reason Sri Krishna wanted them to rule and not the Kauravas, who were irreligious and even evil aggressors.

The Ksatriyas (kings and warriors in general) at that time were the defenders of peace intended not only material but also spiritual. For example sage Visvamitra asked Sri Ramacandra to go with him to kill the Raksasas who were preventing them to celebrate holy sacrifices and they went at their young age. This is how things should be. Without vedic ceremonies there is no material and spiritual prosperity in society and Ksatriyas have to provide that protection.

This is a Vedic warrior, a defender.

Of course we read that kings at Vedic times had the habit to sometimes move war against other kings, and we read about this in the Puranas and other Itihasas. But there are also precise descriptions on how this battles would happen: the armies would meet in an open fields and they would fight.
In his exlanation Srila Prabhupada says that “killing on the battlefield on religious principles…” Never innocent citizens were put at risk. Battles were fought far from the cities and only warriors would be there to fight. In this way, Bhagavad-gita explains, they would attain heavenly planets after death.

In this context there is no possibility for anyone, even the most biased, to make the mistake to equate the noble Vedic Ksatriyas with the disgusting demons who put bombs in churches and hotels in Sri Lanka, where innocent people were killed for no reason. You fight warriors, you don’t kill helpless people who did not even know they were going to a war.
That can’t be even be called a war.
A war is when all parties concerned know that they have an enemy and can prepare a defence. Otherwise is not a war but just mass murder.

And certainly you can’t find in Vedic history Ksatriyas killing people because they followed a different spiritual path.
If you think your path is better and would benefit others, you “fight” with words and good example. Not with bombs.