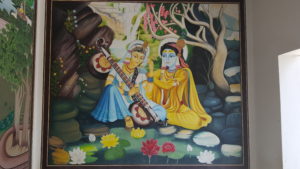 A few day ago I explained how things work in this spirritual sky. The article was titled “Why Krishna had thousand of wives?”.

I report heren the same article:
To understand this and other similar points we have to understand how is the spiritual world, how the Supreme Personality of Godhead lives and thinks. Once we hear it from the greates authorities, like Guru, Sastra and Sadhu, we get an amazing picture, something we never heard from our religions of birth or that never could think.

What we learn is so wonderful that sometimes we have hard time to understand it, even in front of such a “simple complexity”.

We have heard that God is an eye in a triangle, or that he is a fully muscled old man with a thunderbolt in his hand or that he will hurl you down in eternal hell if you sin, and things like that.
Any intelligent man would reject that God can be that way.

The picture that we get from Guru, Sastra, Sadhu is that of an eternal joyful and playful Person, of an eternal abode made of cintamani stone, where there are so many sporting places in which He enjoys in the company of Radharani, Gopis and Gopas.

Beautiful Vrndavana is filled with cintamani gems and many jewelled palaces and temples.
Many regal swans play in the waters of the Yamuna, and in those waters a splendid golden lotus flower grows.
In the middle of that lotus is a golden place surrounded by eight petals.
On these eight petals the eight principal gopis reside, and in the center Lord Syamasundara and beautiful Srimati Radharani sit on a jewelled throne.
The great beauty of the Divine Couple,
and Their charming joking and laughter
appears to be constantly showering nectar everywhere.
Narottama dasa says:
I pray that these blissful eternal transcendental pastimes of the Divine Couple
may be always manifest in my heart.

This is one of the many descriptions of the spiritual world. It’s not emotional poetry. It’s a description of a real existing world.

In this place where everything is a play, in His exuberance He invents new games. He is almighty and doesn’t use it to electrocute people with His lightning. He uses His powers for spiritual enjoyments.
He can do anything He wants. If he finds to be transcendenatally amusing to free 16,100 princes and after having to marry them, He can do it.

The Scripture do not tell us whose was the heavenly voice warning Kamsa during Devaki’s marriage.