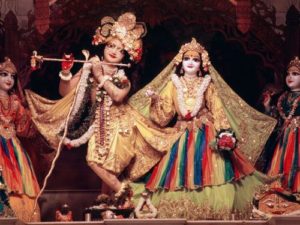 Dear Guru Maharaj Please accept my humble obeisances All glories to You and SP
“From the darkness of false ego, the first of the five elements, namely the sky, is generated. Its subtle form is the quality of sound, exactly as the seer is in relationship with the seen.”
I don’t understand this analogy of the seer and the seen?

Here is an except from the purport to this verse,
“It is said that first the tan-mātrā sound is created and then the sky, and in this verse it is confirmed that actually it is so, but sound is the subtle form of the sky, and the distinction is like that between the seer and the seen. The sound is the representation of the actual object, as the sound produced speaking of the object gives an idea of the description of the object. Therefore sound is the subtle characteristic of the object”
Who is the seer? And who is the seen? Is this about sound and sky? Or is this about the soul and supersoul?

I am very confused about the meaning of the seer and the seen.
Can you please clear it up for me? Thank you.

You are quoting the Srimad-Bhagavatam verse 2.5.25.
tāmasād api bhūtāder
vikurvāṇād abhūn nabhaḥ
tasya mātrā guṇaḥ śabdo
liṅgaṁ yad draṣṭṛ-dṛśyayoḥ
“From the darkness of false ego, the first of the five elements, namely the sky, is generated. Its subtle form is the quality of sound, exactly as the seer is in relationship with the seen.”

The two words “seer” and “seen” are used as an analogy which has the purpose of making easier the understanding of the concept.
One of the intrisic quality of a seer (drastri) is that he is seeing (drisyaya) something or someone. If he wasn’t seeing anything he wouldn’t have been called a seer.

Similarly one of the intrinsic quality of nabha (the sky) is sound, which is its matra (the subtle form of an object). Therefore the two have a direct relationship and they can’t be actually separated.

In order to vibrate or hear sound we need to be in a part of space called nabha. Above this plane sound can’t be heard. Like if you go to outer space you can’t hear sounds because you are above the sky.