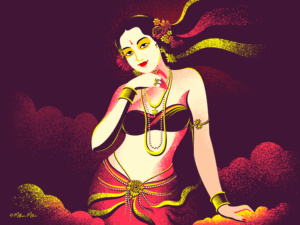 It is related in the story that the dancers always tried to seduce Medhavi. I wonder why they would neglect their duties as Gandharvas in this heavenly garden? The Gandharvas play their instruments and dance to cheer, to confuse the wise or for their personal enjoyment?

Manjughosa (which means one who can produce sweet sounds) was an Apsara. Often (but not always) these celestial maidens associate or are wives of Gandharvas, who are a type of demigod. These Apsaras are endowed of a beauty extremely difficult to resist. Even the greatest sages and demigods have fallen for them. Only pure devotees can make it, like in the case of Haridasa Thakura.

Women in general like the idea of dragging down a powerful man. Whether this happens consciously or unconsciously, the story of mankind (both in the Vedas and in our own history) tells us so. They like to make a man fall down and then leave him, like in the history of Medhavi and Manjughosa.

In this case Manjughosa was engaged by Kamadeva to take a revenge against Siva, who has burned one of his bodies. This is an ancient puranic story I may one day tell. So sage Medhavi could not resist Manjughosa’s beauty and lost his yogic powers.
But sometimes they do it for other reasons, including the necessity to put at a test a sage’s determination.

In general heavenly planets are for enjoyment and Rishis have sometimes hard time living there because of many distractions. This is why they prefer Earth and similar planets because there is really nothing actractive there. Everything in our planet, even the greatest form of enjoyment, is really low class.

There are a lot of philosophical teachings in the story of Papamocani Ekadasi.