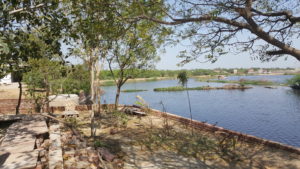 Answer
In the creation there is a great variety of bodies. We know some of them and classify them as minerals, vegetables, animals and humans. In the material world there is a great difference between these, both in form and in substance, while in the spiritual world they vary in form but not in substance. There is no qualitative difference between one body and another because everyone is equally sentient.

But we also receive information from the authorities, such as Guru, Sastra and Sadhu, of bodies of which we have no experience, such as the four-armed forms of Visnu, Brahma with four heads, Siva with three eyes, Indra with a thousand eyes in the body, of Ravana with ten heads, or animals like Taksaka that takes the form of a serpent or a man, of the makara that is described as a crocodile or a shark, but which in reality is neither one nor the other. And so on

Therefore, we must accept that there is not only what we see and know in this life.

For example, there are forms similar to ours, the human, but with peculiar characteristics, such as the color of the skin. Many times we have heard of the color “syama” or “krsna”, which is described as “blackish” or “dark blue”. Acarya, Sastra and the devotees struggle to try to describe it, when in reality it is a color that does not exist in this world. There are similarities, such as monsoon clouds laden with rain, or the color of ocean water at the deepest point, but we can not really imagine or have the direct experience of the color of Krishna’s skin.
To see spiritual things we must develop spiritual senses, as Sri Rupa Gosvami tells us:
atah sri-krsna-namadi
na bhaved grahyam indriyaih
With the material senses we can not have a direct experience of Krishna.

And even with respect to the things of other material planets, we only see rocks and gases. To see what is in other planets or other dimensions, we must have the right senses, as in the case of Sukadeva Gosvami, who in the Fifth Canto of Srimad-Bhagavatam describes a universe of which we have no experience. Sukadeva Gosvami speaks of mandalas, flat territories while we see planets, spheres that float in the universe. This tells us that there are different perceptual capacities and that the creation is multidimensional.

In the Radha Krishna Ganoddesa Dipika, which is one of the books I have transcribed and explained and that I recommend everyone to read (www.kadachaeditions.com), there are unimaginable descriptions of the Gopis skin, such as pink mixed with turquoise, color crystalline (which is not white), colors that change according to the location of the Gopi, and so on.

The human form is the most similar to that of Krishna of Vrindavana, but it is certainly not the same. No human being corresponds exactly to the description of the body of Krishna.
However, in fact, it is the most similar and this similarity gives it a greater blessing, endowing the human body with a higher intelligence than other forms of life, a necessary capacity to understand philosophy.
Wasting human life to do the same things that animals do is a bad choice.