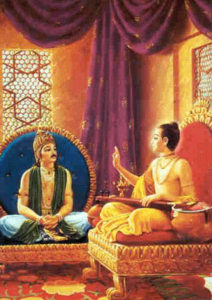 Few weeks ago a devotee asked me about the Manus and how long they live. This is my answer.

The Manu are the progenitor of the human race. Every some time there is a Manu whose task is to populate the Earth and promulgates laws. The book “The Laws of Manu” is called Manu Smriti and (according to some) was written by the first Manu, Svayambhuva, who heard it directly from his father Lord Brahma.

Each day of Brahma 14 Manus come and go. I will now speak about the various Manus and the periods and lenghts of their lives.

According to most Puranas, Brahma lives 100 years. Some other add some years to his life. From human perspective, Brahma lives an extremely long life.

Brahma lives 100 years of these days.

However there is a different way to calculate Brahma’s life much more profitable for historians, and that is according to Manvantaras, or the lives of the Manus.

Each Manu live about 71 Maha-yugas.
According to the Puranas we are in 28th Maha-yuga of the #Vaivasvata Manu, the 7th. Vaivasvata Manu is so called because he is Vivasvan son and he was born around 120,000,000 years ago. In the Bhagavad-gita Srila Prabhupada confirms this figure saying that the Bhagavad-gita was spoken by the Sun God to Iksvaku at the beginning of this Manvantara.

The 28th Maha-yuga of the 7th Manu is particularly blessed because at the end of Dvapara-yuaga Sri Krishna appears and after Lord Caitanya Maha-prabhu.

With these numbers clear in mind is easy to calculate when many of the personalities we find in the Puranas lived.