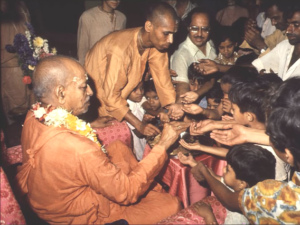 Hari-sauri Dasa : In the early morning of December 10th, Srila Prabhupada called in Mahamsa Swami, along with Hamsaduta Swami and Harikesa Maharaja, who had arrived the night before from Germany. The evening before, the devotees had arranged a pandal program and prasadam distribution, but the program was lethargic and the food sub-standard. Srila Prabhupada was visibly displeased and stressed to his leaders the importance of proper organization, without which everything was doomed to failure.

“Tomorrow I want to see at least five hundred men,” he told them. “I came here to see that, not to sit down in a room peacefully. Give them nice palatable foodstuff. Make very, very nice prasadam. Whatever money is required, I shall pay. Simply theory will not help. Make such prasadam that people will be mad after it. I made this movement successful simply by the Sunday love feast. They did not come to hear Hare Krishna. They came for the love feast. From the very beginning, when I was at 26 Second Avenue, every Sunday I was giving nice foodstuff, at least for two hundred men. Daily more than fifteen, twenty came. I was cooking myself. That is the beginning of my movement.”

Reference: Srila Prabhupada and His Disciples in Germany – Vedavyasa dasa