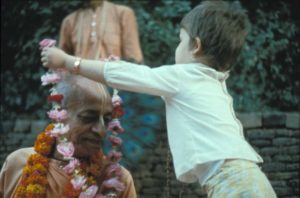 Now that the day of my 63rd birthday has passed, I would like to thank all those who spent kind words for me.
On Facebook, I mainly received happy birthdays, but in private I received many words of appreciation from friends, devotees and disciples.

It is obvious that none of those words can be referred to me as a person but to my spiritual Master Srila Prabhupada.
In fact I would not have been able to say anything interesting, nor to do anything relevant in my life if His Divine Grace had not arrived in my life.

And so, while the Russian devotees made me puspanjali or when the Puerto Rican devotees this morning offered me homages or when the many devotees and friends on Facebook or in my group Whatsapp (or thinking about when I’m going to connect with Santo Domingo tonight) they said very nice things about me, in my mind I projected an alternative of my life without Srila Prabhupada. What would I have been and what would I have done? And all day I spent it with the thought of the famous verse
om ajnana timirandhasya
jnanajana salakaya
caksur unmilitam yena tasmai
sri gurave namah
“I was born in the most obscure ignorance and my spiritual master opened my eyes with the torch of knowledge. I offer him my respectful obeisances. “

His Divine Grace has opened the eyes of all those who have the desire to open them and, in a perfect interpretation of the feeling of Sri Nityananda Prabhu, has spread the greatest thing, Radha-Krishna Prema of Vrindavana.

There’s no more wonderful thing, so how can I repay it? Certainly it is not possible.
Or maybe something that can be done there, at least to show gratitude.
Once in 1976 in France, during a Srimad-Bhagavatam class in our temple of Nouvelle Mayapura, I was sitting at the lotus feet of Srila Prabhupada very close to his Vyasasana. And while he was saying
“If one says he is my disciple he has to spend his whole life preaching Krishna’s consciousness”
he looked at me. He was not telling that just to me, he was telling everyone. But the fact that he said that phrase by looking at me made me become convinced that it was the instruction of the spiritual Master for my life. And when Gurudeva gives a life mission one must take it with the utmost seriousness.