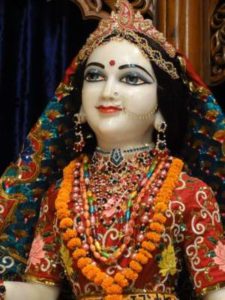 Sudevi is the eighth of the varistha gopis.
She is sweet and charming by nature.
She is the sister of Rangadevi.
Her husband is Vakreksana, the younger brother of Bhairava.
Her marriage with Vakreksana was arranged by his younger brother.
Her form and other qualities are so similar to those of her sister Rangadevi that they are often mistaken for one another.
Like Rangadevi, she has a complexion the color of a lotus stamen and wears a dress the color of a red jaba flower.
Being slightly older than her sister, her age is 14 years, 2 months and 4 days.
On the northwest petal of Madanananda Kunja lies the beautiful emerald-colored Vasanta-sukhada Kunja, the residence of Sri Sudevi.

She is very loving toward Sri Hari, and possesses the bhava known as kalahantarita.

Her seva is to bring water.
Sudevi always remains at the side of her dear friend Srimati Radharani, and arranges Radharani’s hair, decorates Her eyes with mascara, and massages Her body.
She is expert in training male and female parrots and she is also expert in the pastimes of roosters.
She is an expert sailor and she is fully aware of the auspicious and inauspicious omens described in the Sakuna-sastra.
She is expert at massaging the body with scented oils, she knows how to start fires and keep them burning and she knows which flowers blossom with the rising of the moon.

Kaveri-devi and the other friends of Sudevi are expert at constructing leaf-spitoons, playing music on bells and decorating couches in various ways.
Sudevi’s friends are also entrusted with the decoration of the Divine Couple’s sitting place.
Sudevi’s friends act as clever spies, disguising themselves in various ways and moving among Radharani’s rivals (Candravali and her friends) to discover their secrets.

Sudevi’s friends are the deities of Vrndavana forest and they are charged with the protection of the forest birds and bees.