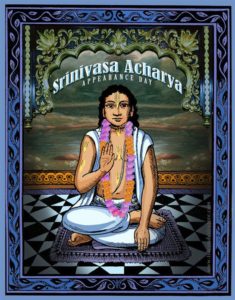 The story of the appearance of Srinivas Acharya

His father was called Chaitanya Das. Previously he had another name, but when he went to Katwa, Chaitanya Mahaprabhu was at the verge of taking Sannyasa. As he came there the barber was just applying his razor to cut the hair of Sri Chaitanya Mahaprabhu. That sight was so unbearable for him, that finally when he heard the sannyasa name that was given to Mahaprabhu, he could only utter: “Chaitanya, Chaitanya, Chaitanya”. Seeing this the people reasoned: “Let’s call him Chaitanya Das, as the only things he says, is ‘Chaitanya , Chaitanya’. That will be an appropriate name for him.”
In this way he received his new name.

Chaitanya Das was married and on one occasion his wife addressed him: “My dear husband, I had a dream; Lord Chaitanya appeared to me, ordering us to have a child.”
And Chaitanya Das said: “What? You are even using Lord Chaitanya for having a child? That is not proper.” “No”, she said: “I promise you, I am not speaking any lie. Mahaprabhu came to me in a dream and he told me that he wanted us to have a child. Chaitanya Das replied: “That is not enough for me. We have to go to Puri and confirm that order, since Mahaprabhu is there. And if He wants us to do this special service there is also a good opportunity He will grant us His darshan.”

The full wonderful story of Srinivasa Acarya in the Archive.