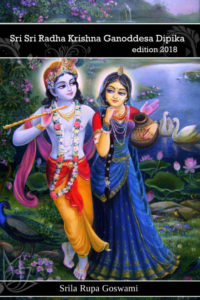 Srila Rupa Gosvami’s lineage can be traced back to Karnataka, South India where his Sarasvata brahmana descendants held influential positions. Rupa Gosvami’s nephew, Jiva Gosvami has explained in his Laghu Toshani that Rupa’s descendants were of the Bharadvaja gotra and were learned in the Yajur Veda.