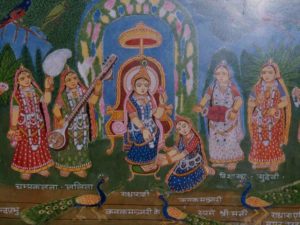 There was some difference between the teachings of Jiva Gosvami and Hridaya Caitanya. The latter was a disciple of Gauri Dasa Pandita, who served Krishna in the mode of friendship[1], while Jiva Gosvami was a Manjari[2] in the mode of madhurya. Being Hridaya Caitanya disciple of Gauri Dasa Pandita he had the same mode and transmitted it to Duhkhi Krishna Dasa. However, while studying the treatises on Bhakti under the guidance of Jiva Gosvami, he clearly felt that among santa, dasya, sakhya, vatsalya and madhura, the last one is the best[3].

In view of this, he became particularly eager to serve Sri Sri Radha Syamasundara in Their sweet pastimes in the groves. He expressed this strong desire to Jiva Gosvami, who then concluded that Duhkhi Krishna Dasa was quite qualified to perform the spontaneous mode of worship[4], and therefore there was no hindrance to enlighten him about the secret principles of madhura-bhava.

Due to Duhkhi Krishna Dasa’s determined insistence, Jiva Gosvami also gave him the rarely attained right to clean the groves. From then on, Duhkhi Krishna Dasa started spending most of his time in the service and worship of Radha Krishna inside his underground bhajan kutir[5], meditating on Them with a fixed mind, doing Hari Nama kirtana, chanting mantras on his beads, etc. And every day before sunrise he used to joyfully go to the groves with a broom and a scraper to clean the groves.

[2] The Manjaris are transcendental gopis who are 10 to 14 years old, which is a few years younger than Srimati Radharani. They do not mix with Krishna directly, their sole purpose is to unite Radha and Krishna and render various services. The Six Gosvamis have manjari forms. Rupa Manjari (Rupa Gosvami) is directly under Lalita Sakhi, who oversees thousands of manjaris.

[4] There is some difference between raganuga and ragatmika. They are not the same thing.

[5] A private place for meditating.

This is a section of the book “Syamananda, the Joy of Radharani”.