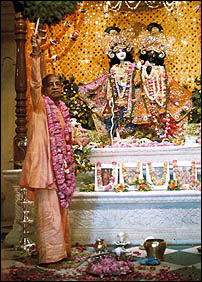 Question
Hare krishna Maharaj
Please accept my humble obeisances.
Right now i am engaged in serving the deities in the temple.
I remember reading before that the kanistha or lower devotee takes to deities worship. The more advance devotees preach. Can you shead some light on this matter

Serving the Deities is an exceptionally important devotional service that should not be underestimated. One could reach perfection with that even without practicing any other sadhana.

Since there would be so many things to say, I’ll trying to avoid making this answer as long as a book and I’ll give you only three quotes from Acaryas.

Srila Visvanatha Cakravarti Thakura says:
sri-vigraharadhana-nitya-nana-
sringara-tan-mandira-marjanadau
yuktasya bhaktams ca niyunjato ’pi
vande guroh sri-caranaravindam
The spiritual master is always engaged in the temple worship of Sri Sri Radha and Krishna. He also engages his disciples in such worship. They dress the Deities in beautiful clothes and ornaments, clean Their temple, and perform other similar worship of the Lord.
I offer my respectful obeisances unto the lotus feet of such a spiritual master.

Sri Prahlada Maharaja:
śrī-prahrāda uvāca
sravanam kirtanam visnoh
smaraṇaḿ pāda-sevanam
arcanaḿ vandanaḿ dāsyaḿ
sakhyam ātma-nivedanam
iti puḿsārpitā viṣṇau
bhaktiś cen nava-lakṣaṇā
kriyeta bhagavaty addhā
tan manye ‘dhītam uttamam
Prahlāda Mahārāja said: Hearing and chanting about the transcendental holy name, form, qualities, paraphernalia and pastimes of Lord Viṣṇu, remembering them, serving the lotus feet of the Lord, offering the Lord respectful worship with sixteen types of paraphernalia, offering prayers to the Lord, becoming His servant, considering the Lord one’s best friend, and surrendering everything unto Him (in other words, serving Him with the body, mind and words) — these nine processes are accepted as pure devotional service.
One who has dedicated his life to the service of Kṛṣṇa through these nine methods should be understood to be the most learned person, for he has acquired complete knowledge.
(Srimad-Bhagavatam 1.9.43):

Srila Prabhupada says:
Regarding worship of the form of the Lord, or Deity, Rūpa Gosvāmī has written the following verse:
“My dear friend, if you still have any desire to enjoy the company of your friends within this material world, then don’t look upon the form of Kṛṣṇa, who is standing on the bank of Keśī-ghāṭa [a bathing place in Vṛndāvana]. He is known as Govinda, and His eyes are very enchanting. He is playing upon His flute, and on His head there is a peacock feather. And His whole body is illuminated by the moonlight in the sky.”
The purport of this verse is that if someone becomes attached to the Śrī Mūrti, or Deity of Kṛṣṇa, by worshiping at home, then he will forget his relationships of so-called friendship, love and society. Thus it is the duty of every householder to install Deities of the Lord at home and to begin the process of worshiping along with all of his family members. This will save everyone from such unwanted activities as going to clubs, cinemas, dancing parties, smoking, drinking, etc. All such nonsense will be forgotten if one stresses the worship of the Deities at home.
Nectar of devotion.

Almost the totality of our Acaryas had their personal Deities. We used to often chant the beautiful song “Jaya Radha Krsna Giti”, where we find the names of Srimurtis accomunated to Their serving Acaryas. The one saying:
…
jaya radha-govinda radha-govinda radhe
(rupa gosvamir prana-dhana he)
etc.

So preachers and sevakas do both.

We also learn a lot of stories about the transcendental relationships between Deities and servant.
None of these great Acarya worshiping their Deities for the whole of their lives were Kanistha Adhikaris but Uttama Adhikaris of the highest level.

However there is an anecdote in Srila Sanatana Gosvami’s relation with his personal Deity (Madana Gopala, later known as Madana Mohana).
Sanatana Gosvami was very poor and had no time to go for madhukari because was engaged in writing books. So the bhoga he offered to the Deities was tasteless. One day Madana Gopala asked to put at least some salt to the roti and Sanatana Gosvami said:
“See? When I accepted that You come with me I told You that I had no money and I couldn’t serve You properly. Now You are asking for salt, tomorrow You will ask for laddus. I can’t provide these things, I have to write.”
How sweet and personal was the relationship between the Lord and His pure devotee!

The idea that we get from this anecdote is that preaching is superior because it will save people who are living as living deads, just waiting for their deaths while enjoying childish sense games.

However it would be a mistake to think that serving the Deities is not preaching.

The first thing that anybody do when arrive to the temple is to go see the Deities. In Vrindavana the Srimurti is the number one preaching. Thousand of people go to the temple every day and first thing they do is to watch with rapt attention and deep devotion Sri Sri Radha Syamasundara, who are so beautiful with Their dresses and all. Only after having seen the Deities to their heart content they pay attention to the wonderful kirtanas and bhajanas in the temple.

So if we invite people to the temple to see the Deities, then Srimurti seva is preaching.

About the differences between Uttama, Madhyama and Kanistha Adhikaris I will not go deep into this topic now but we have to understand the context.

A Kanistha Adhikari is someone who doesn’t care for preaching, and not someone who worships the Deities. This is the difference.
Since we are Gaudiya Vaisnavas and the order of Lord Caitanya Mahaprabhu is get people to chant Harinam, then for us our highest duty is to preach.

You can preach making Srimurti beautiful for people to be attracted, another distribuiting Srila Prabhupada books, another cooking, another chanting and dancing, another writing, another painting and so on and so forth.
Any service we do we have to perform it with the desire in our heart that somebody will receive a spiritual benefit.