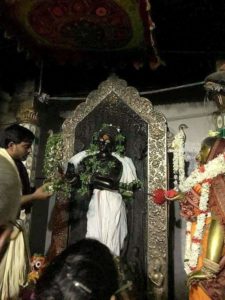 King Vajra was the son of Aniruddha. So he was the great grandson of Lord Krishna.
Vajra had 16 Deities of Krishna and other gods carved from a rare, imperishable stone called Braja and built temples to house these Srimurtis in and around Mathura so as to feel the presence of Lord Krishna.

These are Vajra’s 16 Deities he installed in Vraja.

1. Sri Harideva of Govardhan,
2. Sri Keshava Deva of Mathura,
3. Sri Baladeva of Baladeo,
4. Govindaji of Vrindavan.
5. Sri Nathji, who was originally at Govardhan and is now in Nathdwar, Rajasthan,
6. Sri Gopinath, who is now in Jaipur.
7. Sri Madana Mohana, who is now housed at Karoli Rajasthan,
8. Sakshi Gopala, who is now moved to the town of Sakhi Gopal, Odisha, near Puri.
9. Chakleswar at Govardhan,
10. Kameswar at Kamavan,
11. Bhuteswar at Mathura, and
12. Gopiswar in Vrindavan.
13. Manasi Devi at Govardhan,
14. Vrinda Devi at Kamavan,
15. Pathal Devi at Mathura, and
16. Yogamaya Devi at Vrindavan.

At the time being this is what we know of Saksi Gopala before His pastime with the Vidyanagara brahmanas.

The story
Once there were two Brahmins (priests) from Vidyanagara in South India, who decided to make a long tour of the various holy places of pilgrimage in Northern India.
After a long time the two pilgrims reached Vrindavana, the sacred place of Lord Krishna’s pastimes. They took their bath in the waters of the holy Yamuna River and visited such holy places as Govardhana Hill, together with all twelve forests of Vrindavana, eventually arriving at a great temple where gorgeous worship of the Gopala Deity was performed. Gopala is Lord Krishna in His eternal form as a cowherd boy. The beauty of the Gopala Deity stole away their minds, and feeling great happiness, they remained there for two or four days.

One of these Brahmins was elderly and from a high class family, and the other was poor and from a low class family. The young man, out of love and respect, had rendered menial service to the elderly man, ensuring that he felt no inconvenience from the rigours of travel. The elderly Brahmin was so grateful for this reverential attitude, which he had never encountered even from his own family members, that he announced his intention to hand over to the young Brahmin his daughter in marriage. The young man immediately objected. “Sir, I have rendered service to you only for the satisfaction of Lord Krishna, for the Lord is pleased by service rendered to the Brahmins. In any case, I am not at all a suitable bridegroom for your daughter. You are well-educated and very rich, whereas I am without a decent education and have no wealth. Furthermore, your wife and sons will certainly never agree to it.” The elderly Brahmin insisted. “My dear boy, I will give you my daughter, and I will neglect the position of others! Don’t doubt me in this regard; just accept my proposal!” The young Brahmin replied, “If you really have decided to give your young daughter to me, then say so before the Gopala Deity.”

In those days it was the custom to honour any promise made in front of the Deity, and, in any village, matters of dispute would always be settled in the temple, for no one would dare tell a lie before the Deity. So, entering the temple of Lord Gopala and coming before the Deity, the elderly Brahmin said, “My dear Lord, please witness that I have given my daughter to this boy.” Then the young Brahmin addressed the Deity, saying, “My dear Lord, You are my witness. I shall call for You to testify if it is necessary later on.” Weeks passed by, and eventually the two Brahmins arrived back in Vidyanagara, both going to their respective homes.

After a while the elderly Brahmin remembered his promise, and with some anxiety he called together all his relatives and friends, and related to them what had taken place in front of the Gopala Deity. They were all very disappointed. They said, “When people hear of this, they will make jokes and laugh at you. If you give your daughter to that boy, we shall give up all connection with you.” Indeed, his wife and sons even threatened to commit suicide. The elderly Brahmin said, “How can I undo the promise I made in a holy place? If I do not give my daughter to the young Brahmin, he will call Gopala as a witness.” His son replied, “The Deity may be a witness, but He is in a distant country. How can He come to bear witness against you? Simply say that you do not remember what you said, and I shall take care of the rest.”

The next day the young Brahmin came to the house of the elderly Brahmin, but his son took a stick and chased him away. The young Brahmin then called the village people together, and they in turn summoned the elderly Brahmin to their meeting place. “This gentleman promised to hand over his daughter to me in marriage”, explained the young Brahmin. When the elderly Brahmin told that he could remember nothing of what had taken place, his son stood up and said, “While touring various holy places, my father carried much money. Seeing the money, this rogue decided to take it away. He gave my father poison to eat, which has made my father mad. After taking his money, now he claims that my father promised to give him his daughter!” Doubt entered the minds of the village people, and the young Brahmin protested his innocence. “I told this gentleman that I was not a fit husband for his daughter, but he insisted. He made his promise in front of the Gopala Deity, and I have asked the Supreme Lord to be my witness.”

The elderly Brahmin immediately said, “If Gopala personally comes here to bear witness, I shall surely give my daughter to the young Brahmin.” The son also agreed. We should note that whereas the elderly Brahmin was hopeful that Gopala would actually come, and thereby uphold the promise he had made, the atheistic son thought, “It is not possible for Gopala to come and bear witness.” Thus both father and son were in agreement.

With full faith in Gopala, the young Brahmin started at once for Vrindavana, and upon his arrival he narrated everything in detail to the Deity. “My dear Lord, I am not thinking to become happy by getting the daughter as a bride. I am simply thinking that the Brahmin has broken his promise, and that is giving me great pain. You are very merciful and You know everything. Therefore, kindly be a witness in the case.” Lord Krishna spoke, “I’ve never heard of a Deity walking from one place to another!” The Brahmin replied, “That is true, but how is it that you are speaking to me, although You are a Deity? My dear Lord, You are not a statue; You are directly the Supreme Personality of Godhead, Lord Krishna Himself!” Lord Gopala smiled, and said, “ My dear Brahmin, just listen to Me. I shall walk behind you, and in this way I shall go with you. Do not try to see Me by turning around. As soon as you see Me, I shall remain stationary in that very place. You will know that I am walking behind you by the sound of My ankle bells. Cook one kilo of rice daily and offer it to Me. I shall eat that rice and follow behind you.”

The next day the Brahmin started for his country, and Gopala followed him step by step. The Brahmin became very pleased to hear the tinkling sound of Gopala’s ankle bells, and every day he cooked first class rice for Gopala to eat. The Brahmin walked and walked in this way until he eventually arrived outside his village. Then he thought, “I shall go to my home and tell all the people that the witness has arrived.” Thinking this, he turned to look back, and saw that Gopala was standing there, smiling. The Lord said, “Now you can go home. I shall stay here and shall not leave.”

When the townspeople heard of Gopala’s arrival they were struck with wonder. They went to see the Lord and offered their respectful obeisances to Him. Everyone was very pleased to see Gopala’s beauty. Thus in the presence of the townspeople, Lord Gopala bore witness that the elderly Brahmin had indeed offered his daughter to the young Brahmin. Soon afterwards the marriage ceremony was duly performed.

When the King of that country heard of this wonderful story, he also came to see Gopala, and constructed a nice temple for the Lord. Although some time later the Deity of Lord Gopala was moved from Vidyanagara to the town of Cuttak in Orissa, He is still visible for all to see, and is famous as Sakshi-Gopala (the witness Gopala). It is now near Jagannath Puri.