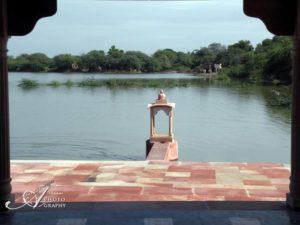 Here once one brahmin asked Krishna,
“I have a daughter of marriageable age, can you please give me some wealth?”
Krishna thought,
“Radha is My only and entire wealth. But for Her, I possess nothing else of value.”
So He told the brahmana,
“I want to give you My entire fortune, not just a little money.”
He then pointed towards Radharani and said,
“She is My entire property and wealth. Please accept Her. There is nothing which is more dearest to me than Radharani.
When the poor brahmana heard this, he began to beat his head in sadness. He said:
“I could not even arrange a suitable husband for my one daughter how can I arrange for two?”.

Then Krishna gave gold to the brahmana equal to the weight of Radharani.
When Radharani understood that Krishna compared her with “thing”, then she got angry with him.
Therefore Krishna realized His mistake and again they relished their sweet pastimes.

The Deha Kunda is where Sri Krishna gave gold equal to the weight of Radharani to that Brahmana.

Deha means body. That is why this place is known as Deha Kunda.

Because of this pastime of donating Srimati Radharani’s weight in gold, there is a temple nearby known as Deh-Bihari Mandira.
Here it is believed, it is very auspicious to donate gold at this place.

Location:
Deha Kunda is located at Uncha gaon and just below Shri Lalita Sakhi’s temple at Uncha Gaon.
Uncha Gaon (village) is situated one mile west of Barsana, is the village of Shri Lalita Sakhi.
If you are at the bottom of the steps that go up to the Lalita Krishna temple, facing the temple, this kunda is on your left about 60 m (180 feet away). 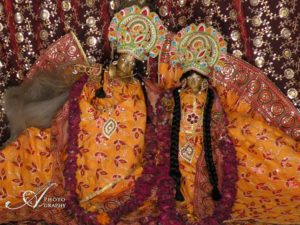 Second version
This kunda is next to the Lalita Devi Temple, at the bottom of the hill.
Deha means “physical body” and at this place the gopis are said to have physically given everything to Krishna.

Third version
The word ‘deha’ refers to both the material and spiritual ‘body’ and it is said that the gopis surrendered everything including their bodies to Krishna at this place. Another story says that Shri Krishna actually donated Radharani’s body at this spot. ”

“Once when Krishna came to meet the gopis here, a very poor brahmana living nearby approached Krishna to ask for ‘dana’ (donation) so that he could get his only daughter married. Krishna declared that His only wealth was His beloved Radharani and therefore He would donate Her to the brahmana. The poor brahmana was dismayed at the thought of receiving another daughter for whom he would have to arrange yet another marriage. At that moment, the gopis brought a scale and placed Radharani on one side of it; they then took of their gold bangles, rings, necklaces, and other items of jewelry and loaded it on to the other end of the scale. When Radharani’s weight was counterbalanced by all the gold jewelry, the gopis immediately handed over all the jewelry to the poor brahmana for his daughter’s wedding. Thus Krishna donated Radharani’s deha or ‘body weight’ in gold to the poor brahmana. Because of this pastime of donating Radha’s weight in gold, there is a temple nearby known as Dan-Bihari Mandira, the word ‘dana’ means ‘donation’.”