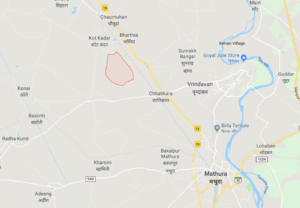 The gopis followed Akrura’s chariot from Nandagrama to the village of Maghera where they experienced feelings of unbearable pain and deep anguish at the thought of losing their beloved Krishna.
At that time they all fainted and fell down on the ground as if they were dead.

Some of them even tried to block the passage of the chariot by throwing themselves on the road in front of it, as death itself would have been less painful than separation from Krishna.
Nevertheless, it was the will of the Lord, that Krsna would leave them all behind and go to Mathura.

In the Bhakti-ratnakara it says.
“Look at this village of Maghahera. The Vrajavasis simply stared down the road in the direction that Krishna went, their anguish was indescribable! Nowadays, people call this place Maghera.”
At this place one can see the ancient village of Maghahera, now called Maghera that was the site of Krishna’s final pastime with the Vraja gopis.

The word ‘maghahera’ means to ‘stare down the road’.

This is the spot where the inhabitants of Vrindavana led by Radharani and the gopis, finally gathered when Krishna and Balarama were being taken to Mathura on Akrura’s chariot.

Due to intense feelings of separation, all the Vrajavasis stood motionless like stones and with unblinking eyes they kept staring down the road, even long after Krishna and Balarama had gone out of sight.

It is said that they were still standing there even after the dust kicked up by the horses hooves had long settled.