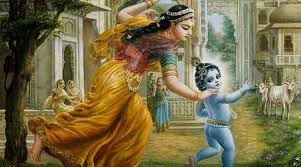 The following is a quote from Thakura Bhaktivinoda:
“When a devotee following the path of vaidhi-bhakti abandons his various material desires and executes bhajana according to the instructions of the scriptures, the spiritual master and the Vaisnavas, then taste (ruci), manifests in his bhajana. When ruci thus appears, he abandons the path of vaidhi-bhakti and enters the plane of raganuga-bhakti.”

Those who do not wish to progress in Krsna consciousness step by step, but instead prefer to jump ahead to rasa, are sometimes called “gatecrashers”.
It is also to be understood that simply talking about rasa does not mean that one has attained the stage of raganuga-bhakti. Talk is cheap, whereas the actual qualifications for rasa are very rare. It is also seen that the pseudo-guru claims himself to be a ‘rasika,’ when in fact he still manifests the symptoms of kama, krodha, and lobha – lust for wealth, anger toward anyone who does not blindly accept him as guru, and greed to initiate anyone who crosses his path – even though such persons may have already been duly initiated by a bona-fide spiritual master. Such deluded persons think that they have attained raganuga-bhakti simply by hearing the lilas of Krsna, but such persons should remember that krsna-lila is also sometimes available in comic books in India.
It should not go without mention that many of the pseudo-gurus, past and present, claiming to be on the platform of a rasika, display the classic symptoms of narcissism. Narcissism is a material condition (a psychological illness) wherein one suffers from:

1) a grandiose sense of self-importance,
2) a preoccupation with fantasies of unlimited success, power, brilliance, beauty, and ideal love,
3) a belief that he is special and unique and can only be understood by, or should associate with, other special or high-status people,
4) a requirement for excessive admiration and worship,
5) a sense of entitlement – unreasonable expectations of especially favorable treatment or automatic compliance with his expectations,
6) a despotic mentality, repressing and exploiting others,
7) a lack of empathy, unwilling to recognize or identify with the feelings or needs of others,
8) envy of others, also believing that others are envious of him,
9) an arrogant or haughty attitude.

Such persons are never truly rasika.

Answer
I take this opportunity to clarify what Raganuga actually is.
Many say that Raganuga is “spontaneous devotional service” but become confused when asked what is the difference with Ragatmika.
ei ta sādhana-bhakti — dui ta’ prakāra
eka ‘vaidhī bhakti’, ‘rāgānugā-bhakti’ āra
“There are two processes of sadhana bhakti: vaidhi and raganuga.”
Sadhana means devotional service “in practice”. We don’t have love for Krishna yet, but we understand that we should want it and we accept some discipline at this end.

This Sadhana can be of two types: Vaidhi and Raganuga.

Raganuga is another process, in which the uttama guru reveals to the disciple what is his nitya-svarupa (his eternal spiritual body) and teaches him how to act accordingly.
Let’s say you are a gopa in the spiritual world. Then you should start right now to dress as a cowherd boy, play as one etc. Let’s say you are Sudama. He has love (raga) and you are taught how to “go” (ga) to follow him (anu). Hence the word Raganuga.
Since spontaneous love is a natural characteristic of Sudama and all gopas, then you are trained to act in that way.
This is why Raganuga is called “spontaneous devotional service”.

But this Raganuga is only in practice. It doesn’t come from the heart (Raga-atmika).
Only when one actually becomes a resident of Vrindavana in the spiritual sky one can do Ragatmika-bhakti.
It must be clear that it is not a false path.
It is the judgement of our Acaryas that it is not the right process for us and this is why our Acaryas have expressed a strong opposition to Raganuga-bhakti and advised the safer Vaidhi-bhakti.

Those unqualified people who take shelter of false gurus, will unavoidably commit offenses, fall down and become sense enjoyers.
That is a nice description of the so-called Gurus who lead people on this ignorance.

This is a section of the book “Brilliant as the Sun (English)”.