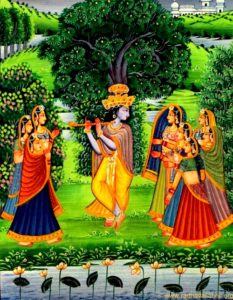 She was born from the womb of Harini-devi.
Here is the story of her conception:

Her father, Mahavasu-gopa, is pious and famous for being devoted to performing Vedic sacrifices. Decorated with wonderful good qualities, is the close friend of Arkamitra.
Mahavasu-gopa desired to beget a powerful and heroic son and a beautiful daughter. To attain this end, the self-controlled Mahavasu engaged Bhaguri Muni in performing a Vedic sacrifice.
Certain nectarean foodstuffs appeared from that sacrifice and the delighted Mahavasu gave them to his wife, Sucandra-devi.
As Sucandra-devi was hastily eating the sacred foodstuff on her front porch, she spilled some of it.
At that time the doe named Suranga, who was the mother of the doe named Rangini, was wandering in Vrajabhumi.
Seeing Sucandra-devi spill some of the foodstuff, the doe Suranga quickly came forward and ate some of it.
As a result of eating this sacred foodstuff, both the gopi Sucandra and the doe Suranga became pregnant.
Sucandra-devi gave birth to a son whom the gopas called Stokakrsna, and the deer gave birth to the girl Hiranyangi in the village of Vraja.