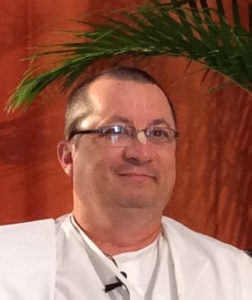 Who is he?
Manonatha Dasa is a devotee of Krishna and one of Srila Prabhupada’s direct disciples, from whom he took initiation in 1974.
He is one of the initiating Gurus of Iskcon.

What has he done and what is he doing?
He has devoted his entire life to studying and teaching the philosophy of Krishna consciousness.

He is the author of many books in three languages: Italian, English, and Spanish. You can find and purchase his books by visiting the Kadacha Bookstore.
He has written thousands of articles on various topics, first among them Vedic-Vaishnava history and philosophy.

In 1995 he founded Isvara Online in various languages, from which he teaches to the great audience of the Net in the form of writings, video, and audio.

What languages ​​does he know?
– In addition to Italian, he also speaks English and Spanish fluently.

We greatly appreciate your donations, which allow us to pay for various technology services and book purchases.