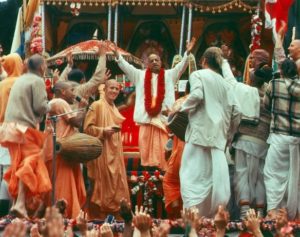 Much of the snow has turned into water, trapped between heaps of white and bordered by slush. The reason is the mild temperature. It got up to 8°C and that meant wrapping my jacket around my left arm, leaving a full orange cloth exposure. People noticed. It stands out; especially with snow patches as a backdrop. It’s been a while since I strolled into the daytime. There’s a lot more pedestrians out.

“Hey, that attire really is something,” said one service/repair person.

Monks are rare. Period. I sometimes wonder if I’ll be a last Mohican. I do keep in touch with some single men by phone — men who hold a thorough interest in Krishna Consciousness, who are potential monk material. However, they are not ready for the long-haul of renunciation. Maybe monk for a month, a week or a weekend?

I do keep in contact with some fairly mature persons who are in a relationship or who are married and at the same time they maintain some level of higher consciousness. It is very gratifying for me and I hope, mutually for them, that a certain segment of their life can be channeled toward the spiritual component by our communication.

The style or colour of garment is rather irrelevant to the person wearing them. State of mind is what is permanent. It is known in Sanskrit as Param, which means supreme.

Param drstva nivartate from The Gita is defined as enjoying a higher taste.