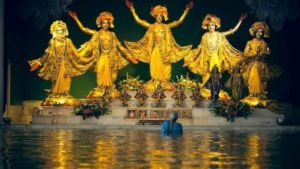 Srila Prabhupada would describe how sometimes during the rainy season in Mayapur, the Ganga is flooding its banks and the entire area goes underwater. And sometimes, Mayapur is almost two months in a lockdown underwater, imagine that! I remember spending some time in that flood during a year and it was quite an experience. We would have to swim from one building to another and we were not the only ones swimming. There were also cobras swimming to add some excitement. Some had rubber boats and the pujaris were taking the water and just using it by filtering it through the cloth and bathing the deities during the abhisekha on Radhashtami.

So I remember that flood vividly, and I also remember how Srila Prabhupada described that the floods in Mayapur symbolise the mercy of Lord Caitanya flooding the entire world. And that mercy of Lord Caitanya has reached everywhere. That mercy came through the disciplic succession, through the six Gosvamis, to Krsna das Kaviraj Gosvami, Narottama das Thakura, Visvanatha Cakravati Thakura and so on, up till the present date – Srila Prabhupada – and here we are! That knowledge has touched the lives of so many people and everything has changed. Suddenly, everything has become auspicious. Suddenly, we are walking on the blessed path. Even those who are touched only a little, they become blessed!