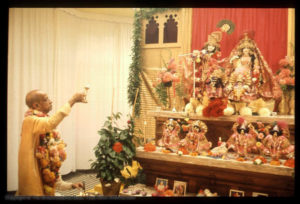 At that time they smiled sweetly and said,

“O Gauridasa! You were formerly Subal Sakha. Don’t you remember? Together we used to have many pastimes on the banks of the Yamuna in Vrindavana.

While acting in this way, Shri Gaura and Nityananda caused Gauridasa to conceive of them in the forms of Krishna and Balarama.

In this way, they appeared in the dress of cowherd boys, with a stick for driving cows in their hands.

Krishna held a flute in his hands and a peacock feather in his hear.

Their necks were decorated with garlands of forest flowers.

Their lotus feet were ornamented with anklets.

In this way, they brought Gauridasa into the mood of his previous conception.

In this mood they revealed different pastimes to Gauridasa Pandit for some time.

After this, it was the Lord’s wish that Gauridasa be returned to external consciousness.

At that time, Krishna and Balaram returned to the altar in their forms as Gaura and Nityananda.