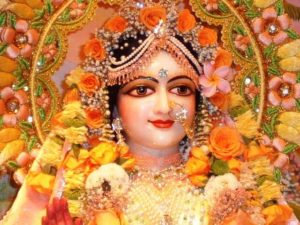 Question:
I would like to ask you something that has intrigued me.
I would love to know the meaning of RADHA as well as Krsna means the Supreme Attraction.

Literally the name Radha (राधा) comes from the sanskrit root radh (रध्, or राध्), which means “to lead to success”. So Radha (Srimati Radharani) leads us to the highest perfection in life.

Our Acarya give to the name Radha a different meaning, as coming from “aradhyate” or “aradhana” which means pleasing, worshiping, propitiating.

Others sankrit scholars claim that the name Radha comes from the verbal root “ric” (ऋच्), which means to praise or to worship, which would be in tune with Srila Prabhupada explanation. It’s the same root of substantives like Rik of Rig Veda, which contains hymns to be chanted during sacrifices.

So Radha means the best amongst the devotees, being Her the very eternal personality of devotion.