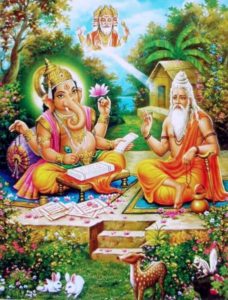 Yesterday I finished the first draft of the Adi Parva, the first of the eighteen books that make up the Maha-bharata of Sri Krishna Dvaipayana Vyasa.

The first draft is the most difficult part because the translation must be organized, the structure built and the whole system arranged.

The second draft will be composed of historical and philosophical explanations at the bottom of the page as footnotes. This is what makes this Maha-bharata unique, because although some (dubious) editions can be found in bookstores, there is no edition in which you find historical and philosophical “purports” seen from the perspective of the Bhaktivedanta school. These purports (or explanations) will be in the footnotes. Already 993 notes have been written even while I was working on the structure. At the end they will be many more.
I am also correcting the too many historical and philosophical mistakes that are characteristic of professional translators. At least the loyal followers of the Vedas will have a Maha-bharata without personal interpretations.

Then there will be a first editing, correcting errors and trying to make words and sentences clearer. I’ll try my best. Even if my English may be decent, it can never be like the language with which I was born. To make things worse I live in a Spanish speaking country and the lack of practice rusts my English.

At last the book will be to entrusted to a native language editor.

For a Krishna Bhakta, the Maha-bharata is the most extensive and elaborated amongst Krishna Lilas. Although those who love Radha Krishna prefer the stories in Vrindavana, nobody can hide his attraction for the Maha-bharata.

THIS EDITION OF THE MAHA-BHARATA

When the work of philosophical and historical explanation will be finished the pages will be many more. I would not be surprised if it surpassed the 600 pages.

The complete Maha-bharata is composed of 18 Parva. The word Parva literally means sections or chapters, but considering the size of the work can very well be translated as “books”.

Each Parvas are subdivide in sub-parvas that are also called the same.

The Adi Parva is composed of 19 of such sub Parvas, 234 chapters and 140 topics.
While the Parva and chapters cannot change, the topics, which have been decided by me, will probably undergo changes.

Let’s now see some of the structure of the Maha-bharata.

1. The arrival of Sauti
2. Questions by the sages
3. Sauti begins narration of the Maha-bharata
4. Creation
5. Vyasa composes Maha-bharata – Ganesa
6. Maha-bharata as a tree
7. When Maha-bharata was published
8. Different editions
9. Summary, from Pandu on
10. Dhritarashtra’s lament
11. The study of the Bharata
12. The glory of reading Maha-bharata
13. Samanta-pancaka, created by Parasurama
14. What is an Aksauhini
15. Division of 18 days of war
16. Oulines of Parvas
17. Summary of all the Parvas, one by one
18. Appendixes: Harivamsa and Bhavishya
19. The importance of the Maha-bharata
20. Janamejaya offends Sarama
21. Janamejaya chooses his purohita
22. Aruni’s trial
23. Upamanuy’s trial
24. Veda’s trial
25. The story of Utanka
26. Utanka goes to Hastinapura seeking revenge
27. Cyavana Muni and the curse on Agni
28. The story of Ruru
29. How Astika saved the snakes, in brief
30. The story of Garuda begins
31. The churning of the ocean of milk
32. The bet between Kadru and Vinata
33. Appearance of Garuda
34. The story of why Surya wanted to burn the worlds
35. Garuda wants to set free his mother
36. Garuda battles the Devas
37. The names of the main snakes
38. The snake’s search for solutions
39. The story of King Pariksit
40. The birth of Astika, the savior of the snakes
41. Questions about Pariksit ascension to heaven
42. The snake sacrifice
43. The names of the snakes who perished in the fire
44. Arrival of Vyasa
45. Vyasa instruct Vaisampayana to narrate Maha-bharata
46. The greatness of the Mahabharata
47. Uparichara Vasu; birth of Vyasa
48. The plight of the earth heard by the Devas
49. The Devas incarnate on Earth
50. Genealogy of main creatures
51. Descendents of Siva
52. Sons of Angira, Atri, Pulastya, Pulaha, Kratu
53. Daksa
54. Genealogy of Devas and kings
55. Dushmanta and Sakuntala – Bharata
56. Genealogy of the Bharata race
57. Pururava
58. Short story of Yayati
59. Kacha. the son of Brihaspati
60. The quarrel between Devayani and Sarmistha
61. Yayati, Devayani and Sarmistha
62. Yayati hurled down back to earth
63. Who is a Muni?
64. Who attains oneness with Brahma, the ascetic or the man of knowledge?
65. Astaka stops the falling of Yayati
66. The merits of Sivi
67. The descendants of Puru up to Santanu
68. The Bharata race briefly, from Daksa to Janamejaya
69. The story of Santanu and Ganga
70. Santanu after being abandoned by Ganga
71. Devavrata (Bhishma)
72. Santanu meets Satyavati
73. The vow of Devavrata
74. The sons of Santanu and Satyavati
75. Vicitravirya marries Ambika and Ambalika
76. Preserving the Bharata lineage – Story of the birth of Vyasa
77. The birth of Dhritarastra, Pandu and Vidura
78. The curse on Yamaraja by Animandavya
79. The three brothers grow up
80. The marriage of the Kuru princes
81. Kunti and the birth of Karna
82. King Pandu
83. Conquests of Pandu
84. The sons of Dhritarastra
85. Duhssala, the daughter of Dhritarastra
86. The names of Dhritarastra’s sons
87. Pandu cursed and his journey
88. The conception of the Pandavas
89. The death of Pandu and Madri
90. Kunti and the Pandavas to Hastinapura
91. Satyavati retires
92. The first hostilities
93. Birth of Kripacarya and Dronacarya
94. Arjuna, the best of Drona’s pupils
95. Ekalavya
96. Other Drona’s pupils
97. The tournament
98. Karna clashes with the Pandavas
99. The Pandavas defeat Drupada
100. Evil instructions of Kanika to Dhritarastra
101. Yudhisthira installed heir-apparent and more instructions from Drona
102. The burning of the house of lac
103. The killing of the Raksasa Hidimba
104. The marriage of Bhima and Hidimbi – Birth of Gatotkacha
105. Meeting with Vyasadeva – To Ekacakra
106. The killing of Baka
107. The birth of Dhristadyumna and Draupadi
108. The Pandava decides to go to Pancala
109. How Draupadi got the blessing to have five husbands
110. Meeting Citraratha
111. The story of Tapati
112. The story of Vasistha and his enmity with Visvamitra
113. The story of Parasara and Aurva
114. Why Vasistha begot a son into Kalmashapada’s wife?
115. To Pancala for Draupadi’s Svayamvara
116. The Svayamvara
117. Draupadi and the five Pandavas
118. Krishna meets the Pandavas for the first time
119. The Pandavas revealed
120. The marriage of the Pandavas with Draupadi
121. The five Pandavas are five Indras
122. The Kuravas gathered in council
123. The arrival of Vidura
124. The kingdom split in two
125. The arrival of Narada Muni – The story of Sunda and Upasunda
126. Creation of Tilottama
127. The rule between the five husbands
128. Arjuna had to break the agreement
129. Arjuna goes to the forest
130. Arjuna marries Ulupi
131. Arjuna marries Citrangada
132. The deliverance of the five Apsara-crocodiles
133. Arjuna sees Subhadra
134. The abduction of Subhadra
135. Back in Indraprastha – birth of Abhimanyu
136. Krishna and Arjuna go to the bank of the Yamuna
137. Agni asks Krishna and Arjuna help him to burn Khandava
138. The burning of the Khandava forest
139. Mayadanava
140. The Sarngakas birds
Those who will read and study the Maha-bharata are very fortunate.
March 6, 2019