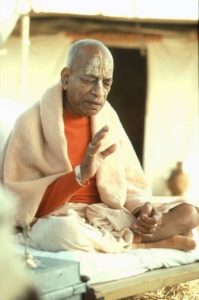 1) – reading the book of His Grace Ravidra Svarupa “founder Acarya” on pages 36-39 I read that Srila Prabhupada could have been killed by envious godbrothers and immature Disciples!
….

Quite a few years ago came out a theory according to which Srila Prabhupada didn’t die of illness but was poisoned by some envious godbrothers or disciples.

I took some time to read and discuss the two theories, one saying that they had proof that it happened and the other that it didn’t happened.

I approached this subject matter in two ways: one with my gut instinct and the other with observing facts.

My gut instinct told me that was something impossible to happen, that such an evil demon couldn’t exist and certainly not amongst the Vaisnava society.

The other approach was different. I wanted evidences. Are there any proof I could touch, see in person, personally verify?
There were not. I could not have evidence nor that happened nor that did not happen.

So this is how I proceed (and how I suggest you to proceed) in cases like this:

When you have a problem that you simply can’t solve, just give it up or it will become a nightmare in your mind.
Remember what we came in Krishna Consciousness for: we came here to be devotees, sadhus, scholars. We came here to renounce the material world to go back to Godhead.

If there is a problem and you can correct it, obviously do something about it.
But if you can’t do anything, just back off, chant your rounds and study Srimad-Bhagavatam.

Isvara parama krishna. Krishna is the supreme controller.
If lived or still lives a demon who really poisoned Srila Prabhupada nor you nor I can’t do anything about it.
In terms of punishment, nobody could do anything worse to him than Yamaraja and his Yamadutas.
If we do not believe in the law of karma and in the right punishment by divine personalities etcetera, what are we doing here?

Finally, I suggest devotees to be careful to curb in themselves the perverted pleasure to read and discuss topics of this nature.
There are many crazy theories going around fabricated by people who have no taste for Krishna Consciousness and need some recreation by inventing fairy tales. Jews controlling our movement, Illuminatis, conspiracy theories, CIA and all similar rubbish.
To understand our philosophy we need to keep our mind clean and sattvika.