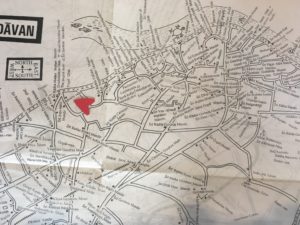 As a young boy Advaita Acharya became a great scholar of all the Vedic literatures and came to the conclusion of pure Bhakti.
When He was still young His mother and father both disappeared from this world and He went to Gaya to perform their Shraddha ceremony.
On His pilgrimage to Gaya He met Shrila Madhavendra Puri who initiated Him in the Madhva Sampradaya.
Shrila Madhavendra Puri instructed Him in all the nuances of the sweet Leela of Vrindavan especially Madhurya Rasa.
He told Him that one can gain entrance into the sweet Leela of Vrindavan by always remembering Krishna, by hearing and chanting His pastimes and by constantly chanting His Holy Names.

After that Advaita Acharya began to travel to all the holy places throughout India and at last he came to Vrindavan.
He traveled through all the 12 forests of Vrindavan and then he came to this place.
He lived under this Banyan tree at Advaita Vata.
It was at this place that the deity of Madan-Gopal who later came to be known as Madanmohan appeared to Shri Advaita Acharya.
He worshipped this beautiful deity of Madan-Gopal under this Banyan tree.
He stayed here waiting for the indication of the Lord for Him to go back to Navadwip Dham for calling out to Lord Chaitanya to appear in this world.

Other version
Advaita Acharya discovered the original Deity of Madanmohan (Krsna) in Mahavan-Gokul and served Him here at the base of an old “vat” tree.
Before His departure for Navadvip He entrusted the Deity to brahmana Chaubhe in Mathura.
Years later Caitanya Mahaprabhu sent Sanatana Goswami to Vrindavan to discover lost places of Krisna’s pastimes and write books about devotional service.
Advaita Acarya performed his bhajana here at Advaita-vat at the base of the hill.

Location
at the foot of Dvadasaditya Tila.