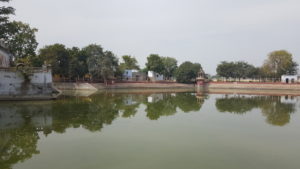 This place is located about 2 Kms from Anyor village on the left side.

After having spent the whole night engaged in rasa-dancing with the gopis, Krishna, while still wearing His special rasa-lila dress, came here to rest on the banks of Candra-sarovara.

The gopis also came there and began massaging Krishna’s limbs and also fanned Him in order to relieve His fatigue.

This lake is also very dear to the moon-god Candra, because at this place, due to experiencing transcendental ecstasy, he became momentarily stunned and ceased all external movement when he witnessed the rasa-dance between Radha and Krishna.

This lake is famous all over Vraja because of the spring-time rasa-lila that took place near its shores.

Even Lord Balarama became stunned when He also witnessed the extraordinary rasa-lila at Candra-sarovara, while He stood on top of Govardhana Hill.

The place from where Lord Balarama saw the rasa-lila became celebrated as Doka Dauji. The word ‘doka’ is a corrupted form of ‘dekna’ or ‘to look’.

Chandra-sarovara is the site of many other wonderful pastimes where Krishna and the gopis would regularly meet and engage in singing, dancing, playing sports, and drinking honey.

The honey drinking pastimes known as madhupan-lila were very popular, not only with Krishna and Balarama, but with the gopis and the cowherd boys as well.
The word ‘madhu’ means ‘honey’ and ‘pan’ means to ‘drink’.

On the banks of this lake, Krishna often engaged in decorating Radharani by applying mascara and other cosmetics on Radha’s moonlike face, and decorating Her transcendental limbs with gem-encrusted ornaments and golden jewelry.

Krishna would also comb Radha’s long black hair into braids and then decorate Her braids with sweet smelling forest flowers.

There is a shrine here on the banks at Candra-sarovara known as the Sringara Mandira that commemorates this particular pastime.
The word ‘sringara’ means ‘dressing’ or ‘decorating’.

Candra Sarovara 2
Candra Sarovara is on the other side of the main road which runs by Parasauli.
This is where the moon-god (Chandra) ceased all external consciousness (movements) while watching the rasa dance.
This pastime is described in Caitanya Caritamrita and Ujjvala Nilamani, Nayika Prakara.
Krishna rested here with the gopis after the spring rasa dance.
It is said that Radha and Krishna would come to this kunda daily.

Where is it
A lato di Sankarsana Kunda, verso est

VIDEO
You find videos of Candra Sarovara in our Archive 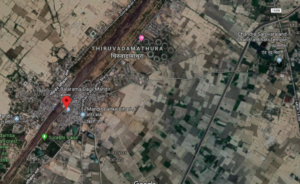 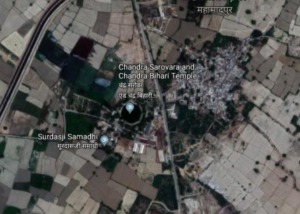 We are going to begin in Spanish (just because we already have some audience) and then we hope to start soon broadcasting live of Krishna Katha with Zoom.