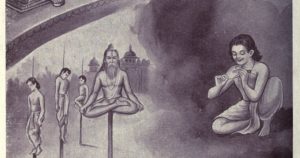 This is a question I tried to answer time ago. However I had difficulties in finding sastric backups as I was requested to.

I heard several numbers, included that Srila Prabhupada had supposedly said eight years, but I could never read or hear Srila Prabhupada saying that. If someone is in possession of a bonafide sastric quote I’ll be glad to know.

I come back on the point because I just found a scriptural authority establishing the beginning of karmic responsibility.

Here sage Mandavya, later known as Animandavya, asks Yamaraja why he had been punished so harshly by being impaled though innocent. All reaction are given by the Lord of Karma, who is Yamaraja (also known as Dharmaraja).

Yamaraja explained that Animandavya had pierced an insect with a blade of grass. That’s why he had to suffer so much. Having done that when he was very young and judging the reaction disproportionate, the sage punished Dharma to take birth from a Sudra woman and he was known as Vidura.

Morover Rishi Animandavya said:
a caturdasakad varsanna
bhavisyati patakam
paratah kurvatameva
dosa eva bhavasyati
“I establish that those who are younger than fourteen years will not be punished for their sins. The punishment will be given after their fourteenth year.”

You will find the whole story of sage Animandavya and more philosophical explanations in our edition of the Maha-bharata, Adi Parva, soon to come.