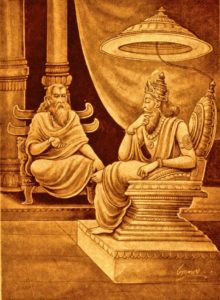 Democracy is supposed to be ‘by the people, of the people, and for the people,’ but I fear it may soon be redefined as ‘buy’ the people, ‘off’ the people, and ‘far’ (from) the people,” exclaimed Suresh, a 25-year-old man I met while returning to the temple from an outstation program. He was disappointed that India, the world’s largest democracy, recorded just 35-50% polling in the recent elections. Suresh also noted that over 150 of the members elected to parliament have criminal cases against them. “The meaning of elections is lost, democracy is in peril, and we have no inspiration to look up to.”

Back at the temple, I reflected on the comments of Dr. A.P.J. Abdul Kalam, the honorable former President of India, who revealed his inspiration to be an unsung hero of ancient India Mahatma Vidura, a minister at the kingdom of Hastinapura. Dr. Kalam even composed a poem extolling Vidura’s glories.

Vidura was born of a maidservant at the royal palace of Hastinapura (now Delhi), the hot-seat of intriguing politics. His astute wisdom and genuine concern for the Kuru family the rulers of Hastinapura earned him the position of a minister. Dhritarastra, although older of the two brothers who inherited the kingdom, was blind from birth and thus disqualified to be the emperor himself. However, he ruled the kingdom on behalf of his brother Pandu who went to the forest to perform penances. After the untimely death of Pandu while in the forest, Dhritarastra eyed the throne, wanting to deprive the sons of Pandu (Pandavas) the legitimate heirs from inheriting the kingdom. He wished that his evil son, Duryodhana, takes over the kingdom. Meanwhile Duryodhana devised one sinister plan after another to kill the virtuous Pandavas, and Dhritarastra silently approved the plans.

Vidura was a pure devotee of the Supreme Personality of Godhead, Lord Krishna, and he carried out the Lord’s will by serving His devotees, the Pandavas. Vidura was pained to see terrible injustices repeatedly inflicted upon the Pandavas. He used his political acumen to help the Pandavas secretly escape from a house that Duryodhana had planned to set fire to, with an intention to burn them to death. While he revealed his love for the Lord by serving the Pandavas, Vidura also revealed his fearlessness in confronting Duryodhana and his 99 brothers. Amid the cruel ministers and crafty friends of Duryodhana, Vidura stood tall in character and integrity. He strongly voiced his disapproval of Duryodhana’s nefarious plans and repeatedly implored Dhritarastra to abandon his wicked son. Vidura warned of the destruction of the whole family due to Duryodhana’s atrocities against Krishna’s pure devotees, the Pandavas.

Through a cheating gambling match, Duryodhana banished the Pandavas to a thirteen-year exile. Later, when the Pandavas returned and demanded their rightful share, Duryodhana openly refused. A war seemed imminent. As Vidura’s desperate appeals fell on deaf ears, Krishna, in a last attempt to avert bloodshed, came as a peace messenger on behalf of the Pandavas. Duryodhana foolishly and unsuccessfully tried to arrest Krishna, and while leaving, Krishna declared that the destruction of Kauravas was now certain. Vidura again urged Dhritarastra to heed to good counsel. Dhritarastra always consulted Vidura, knowing him to be a genuine well-wisher of the family. However due to weak heartedness, coupled with his spiritual blindness, he did not accept Vidura’s counsel but tacitly supported his wicked son.

Vidura’s untiring efforts to serve the kingdom were misunderstood by Duryodhana. In the royal assembly, Vidura was humiliated, condemned for disloyalty to the throne, and accused of being a traitor in the guise of a friend. He was ordered to leave the kingdom at once. Vidura’s decades of faithful service, far from being acknowledged, leave alone being appreciated, was rewarded with ungratefulness and insult.

Vidura’s response to a crisis

Vidura was hurt, yet with his devotional intelligence he saw the Lord’s plan at work. He saw Duryodhana as a victim of lust for power, and a puppet in the hands of the Lord’s illusory energy, maya. He saw himself as a fortunate recipient of the Lord’s mercy, and thus silently thanked Duryodhana for this act. The banishment was a blessing; it gave him a chance to practise exclusive devotional service to Krishna, without any hindrance. He soon left on a pilgrimage to holy places to worship Krishna.

The attraction to Krishna gave Vidura not only the strength to stand for truth but also the ability to tolerate personal injustices. During his travels he met Uddhava, a close associate of Krishna. Rather than lament at his personal tragedy, Vidura expressed eagerness to hear from Uddhava the activities of Lord Krishna. This excitement to know about Krishna kept him happy during the terrible crisis of his life.

Vidura’s example shows that cultivating an intimate connection with Krishna helps us hold on to sacred principles, and remain enthusiastic even as the political weather gets turbulent by the day. The inner strength and wisdom that naturally develop by sincere practice of Krishna consciousness keep the devotee serene and happy at all times. In stark contrast, the recent elections saw the ousted ministers cry foul and openly hurl accusations at each other.

While modern politicians’ careers are tainted with corrupt and immoral practices, and their characters shrouded in suspicion, Vidura’s example sets the standard for all leaders to be God conscious. Srila Prabhupada, the founder of ISKCON, repeatedly expressed the need for political administrators to be spiritual practitioners. He even suggested to Indira Gandhi, the former Prime Minister of India, to hold kirtanas, chanting of the holy names of the Lord, in Parliament, and help ministers develop God consciousness.

Is Vidura, by his renunciation, indicating that a leader should give up his service to his people and go to the forest instead? No! Vidura, even in his travels, constantly thought of the welfare of the general populace that has become averse to devotional service to Lord Krishna. His heart burned in compassion for the suffering people. During his travels he also met Maitreya Rishi, another great sage, and discussed with him the methods for spiritual awakening of the misguided masses. Thus a spiritual leader, whether living in the forest or at a palace, carries the spirit of service in his heart, and offers the best he can, to bring people closer to God.

A sincere devotee’s practice of Krishna consciousness softens his heart with emotions of love and compassion towards all living entities. This is because a devotee sees all beings as parts and parcels of his dear Lord, Krishna. Vidura’s selfless service and unparalleled compassion reached its perfection when he returned to Hastinapura after the war at Kuruksetra.

In the fratricidal war, the Kauravas were annihilated and Pandavas, directed by Krishna, got back their rightful share. The Pandavas, however, continued to care for Dhritarastra. Vidura returned to the palace, not to stake any claim on his share of the property, but to educate his blind brother Dhritarastra. Despite suffering the pains of old-age, and the death of his hundred sons, Dhritarastra continued to seek material comforts, living at the house of the very men whom he plotted to kill his entire life. Vidura chastised Dhritarastra and ordered him to renounce worldly attachments and practice devotional service. Vidura’s words, though apparently harsh and sarcastic, came from his compassionate heart. His speech acted like a surgeon’s scalpel that cuts only to heal. Vidura’s words cut Dhritarastra’s material attachments, and restored his spiritual vision and determination. That very night the blind Dhritarastra secretly left the palace to pursue God consciousness and eventually achieved a spiritually exalted destination.

Earlier when humiliated and banished, it appeared Vidura didn’t get much success in his political career, yet now by being compassionate even to one who passively watched his humiliation, he reveals the real understanding of success to offer the best you can as a servant of all. Vidura’s loyalty and faith in God should humble us, especially those who abandon ideological loyalties and switch parties for better career and monetary prospects.

Vidura’s exemplary renunciation and forthrightness was perfectly blended with humility. Despite being an intimate associate of Krishna, he considered himself lowly and unqualified to be a recipient of the Lord’s mercy. When ostracized by Duryodhana, he could have immediately gone to Dvaraka, Lord Krishna’s headquarters. Instead he visited other holy places to associate with saintly devotees and hear about Krishna from them. He felt contaminated by the sins of murky politics at Hastinapura and sought to purify himself first before seeking a direct audience with Krishna.

A devotee’s humility is most endearing to Krishna’s heart. Krishna is not the property of the rich, educated or beautiful people. He reserves the right of not being exposed to those devoid of humility and devotion. However if a devotee is simple and surrendered to the Lord’s will, Krishna is purchased. Earlier, whenever Krishna came to Hastinapura, He regularly visited Vidura’s residence, even as the cunning Duryodhana offered royal hospitality to woo Krishna on his side. Krishna ignored all of Duryodhana’s reception and happily accepted Vidura’s simple offering of love.

Humility is the hallmark of a true leader. A humble person always takes the position of a servant of the Lord and all living entities, and in this consciousness, executes his spiritual and worldly responsibilities. Vidura’s tireless efforts in the mood of a servant eventually bore fruit as he successfully redeemed his wayward brother.

Our “noble” modern politician also claims to be a servant of the masses and begs for votes before elections. On rising to power, however, he furthers his own political ambitions and ignores the common man only to remember him again before the next elections. No wonder, Indians love to hate politicians.

Vidura’s example is thus a sobering reminder that life will present many challenges. At such times, remembrance of Krishna, living by sacred principles, and a humble service attitude can keep us happy and lend meaningful purpose to our lives.