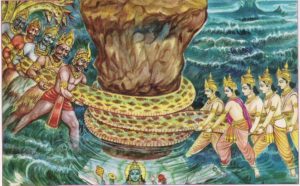 Why the Devas are called Sura and the demons Asura?

During the churning of the ocean of milk, many personalities and objects appeared. One of those was Varuni, also called Suri. She produced an intoxicating juice. The Deva accepted this juice, and so they came to be called #Sura while the demons rejected it and they were called #Asura.