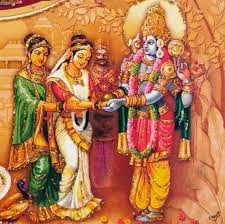 Once sage Bhrigu was approached by the demigods to identify who is the greatest among Lord Brahma, Lord Vishnu and Lord Shiva.
So Sage Bhrigu thought of a plan to test all three.

First he went to Lord Brahma and didn’t pay any respect to him and even insulted him. Lord Brahma become very angry and was about to curse him. Bhrigu had to flee hurriedly to save himself.

Second he reached Kailasha to meet his brother Lord Shiva. Instead of greeting Him, Bhrigu insulted him in front of mother Parvati and told him many bad words. The Lord became angry and was about to kill him.
Again the sage had to run from the spot.

Then he went Visnu’s abode where the Lord was sleeping and mother Lakshmi was massaging His legs.
When Bhrigu arrived, he kicked the Lord on His chest. Not feeling at all offended, Vishnu fell on Bhrigu’s feet and asked for forgiveness because His chest was hard as a stone.
So it was clear who was the greatest between the Trimurti.

But Laksmi Devi, who resides on the point Bhrigu kicked, did not like Bhrigu’s action and cursed not just him but all the Brahmanas.
She said:
आज से में किसी ब्राह्मण का
घर में निवास नहीं करूंगी ।
“From today, I’ll never stay in any Brahmana’s house.”
Since Laksmi is the goddess of fortune, the Brahmanas were so destined to remain poor.

She also said to Visnu that he had to punish Bhrigu and not apologizing to him.

Lord Vishnu started searching for His beloved Laksmi. Heart-broken, Lord Vishnu meditated at Sesacalam and an anthill formed over Him.
Out of devotion, a cow started to pour all her milk over this very anthill as an offering to Visnu. The angry cowherd got angry as he had no milk and threw his axe towards the cow to kill her.
But Lord Visnu intervened to protect her and the axe hit Him on the head, causing a large gash. When the cowherd realized what he had done, he left his body in repentance.

The Gandharva princess Nila Devi was passing by and witnessed this event. She was sorry to see Visnu with this injury. So she cut her hair and with that covered the Lord’s wound and balding scalp.
In response to this chivalrous act, Lord Visnu declared that He will ever be pleased with whoever devotee donates his hair, as it will help him clear his debt towards the princess.
This is why Lord Visnu’s devotees shave their hairs.

Lord Vishnu meanwhile fell in love with Princess Padmavati, who had been found by the king in a field on a lotus flower.
In her previous life Padmavati was Vedavati, the daughter of Rishi Kusadhvaja.
Vedavati was destined to marry Lord Visnu, but when she was pursued and harassed by the wicked Ravana, she took refuge with Agnideva. Vedavati pledged to return and be the cause of Ravana’s death and destruction. She took birth again as Sita Devi.
You find all this nice story in the Uttara Kanda of the Valmiki Ramayana.

Vedavati was the Maya Sita and when Sita came out of the fire, Agni asked Rama to marry Vedavati also. But Lord Rama had pledged to have only one wife, so He promised Agni that He will marry Vedavati in Kaliyuga.

Vedavati took birth as princess Padmavati and Visnu married her. They got married in the Sri Kalyana Venkatesvarasvami temple in Tirupati, as a fulfillment of that promise.

But the wedding was very expensive and, since Laksmi Devi had left Him, Visnu had no so much money. So Kuvera gave Him the money at the condition that He will not leave Tirupati till the loan is repaid.
And Visnu it still there, unable to repay Kuvera.

Goddess Lakshmi becomes angry on learning about this wedding. But on learning that the wedding happened due to fulfilling of several past happenings, Lakshmi once again returned to Lord Vishnu’s heart and remained there forever as His co-bestower of blessings.

Padmavati is still worshipped in Tirupati as an aspect of Goddess Lakshmi. 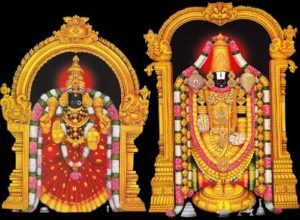 These are the events, which explain why devotees worship Padmavati in the temple.

At the end of this story Laksmi Devi became pleased with all the devotees and blessed them by saying:
परंतु मै नारायण और प्रातः महादेव
भक्त ब्राह्मणो का घर में निवास करूंगी
“But I will stay in the houses of Lord Visnu’s devotees and also in the house of Lord Shiva’s devotees.”