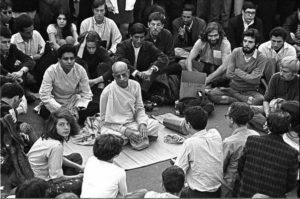 Question
Why do I need a Diksa Guru if I have so many Siksa and also I have Srila Prabhupad who can instruct me?

Answer
The mechanism of diksa works this way: a disciple asks “please accept me” and a Guru says “yes”, if he so wants.

Without a “yes” you are nobody’s disciple and the idea of “so many siksa gurus” and “I can read Srila Prabhupada’s books” is a cover for an anarchic mentality, where you say to have many gurus when you actually have and want nobody.

This “yes” by the Guru is the key to spiritual life and only at that moment you are connected to the parampara and to Krishna.

The story of Ekalavya (Maha-bharata, Adi Parva, Sambhava Parva, Adhyaya 32) in this regard it is instructive.
Ekalavya asked Dronacarya to accept him as a disciple but was refused. Ekalavya continued to consider himself a disciple of Dronacarya, built a Murti of him and practice Dhanurveda in the forest worshiping Drona. He made great progress but not as much as he would if Dronacarya had accepted him. When Drona came to know that Ekalavya said he was his disciple, he pretended Guru Daksina and only at that point Ekalavya became his disciple. In his case initiation was the Guru Daksina because if Drona had accepted Guru Daksina meant that he had accepted him.

In other words, you can’t say you are somebody’s disciple (in diksa or siksa line, is the same) unless the Guru says yes.
Here is where the “Ritvik-vadis” are wrong.

Now, this yes could have the form of a formal initiation, like the one we are used to with the fire ceremony and all, or could be a simple “yes, I accept you as a disciple”, or in other forms but some formal initiation is compulsory.
Again, formality doesn’t mean superfluous but completing.

In other words, without some type of initiation you are not connected to Krishna. The connection is only through the Guru.

More:
“One is not considered a perfectly cultured man without being initiated and trained by an acarya. It is said, therefore, that one who has approached an acarya is actually in perfect knowledge.
(From Krishna Book)

And more:
[…] He must be properly initiated. […] You can – you must be initiated, either you are a grhastha or sannyasi or brahmacari. Not that without being initiate you’ll whimsically chant and the effect will be the same. No, you must be initiated. Adau gurvasraya. You must accept a Guru.
(Lecture by Srila Prabhupada, London 9/23/69)

And more:
“[…] Arjuna was hearing Krishna speaking Bhagavad-Gita but still he submitted as Krishna’s disciple. ‘Now I submit unto You, please teach me.’ So this is the process…
(Srila Prabhupada, Letter to John Darsinos, 11/23/68)

These are only a few of the many quotes we could gather from Guru, Sastra and Sadhu.

Now that we have ascertained that “some type of initiation” is mandatory, it is useful to understand why.

This question can be easily seen through if we understand what is Krishna Consciousness.

Krishna Consciousness it’s not based on jnana (knowledge) but on bhakti (devotion). Jnana is an instrument of bhakti, not the final goal. Without bhakti, you know but you don’t taste, like the example of the bee buzzing around the honey jar.

If Krishna Consciousness was based on knowledge, then one would be right by saying, “I just need siksa gurus and books. The more the better.” This is what mayavadis and the like say.
But Krishna Consciousness is different. Unless one doesn’t develop attraction for Krishna through studies, this knowledge will not do much.

Guru is sevaka-bhagavan, represent Krishna and should be treated as Krishna. He is not Krishna but must be treated as Krishna.
And why is that?
Because you cannot hear or see the Srimurti speaking or moving, nor the Mahamantra, nor the prasadam. Guru speaks and you can hear him, you can see him living, moving and personally relating with you.
Serving him as you would serve Krishna is the perfect training for devotion.

Therefore if you do not formally accept somebody (diksa or siksa) as a guru, you may become a great scholar but not a pure devotee.

Additional note:
Sometimes we see devotees asking to a Guru to accept them. The Guru says “yes”, but the then they forget about this or goes to someone else. This is definitively not good.
A “yes” by a bonafide Guru is a serious thing, not to be played with.
Until the formal initiation one can change but in the case he changes his mind he must first take the permission of the one who had already told him “yes”.