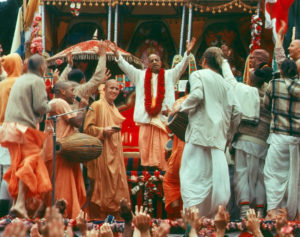 Professor: I see. Don’t you think it’s against the dharma-sastra?

Professor: No. Tell me why.

Prabhupada: Because in the Bhagavad-gita it is said, catur-varnyam maya srstam guna-karma-vibhagasah [Bg 4.13].
[According to the three modes of material nature and the work associated with them, the four divisions of human society were created by Me. And, although I am the creator of this system, you should know that I am yet the non-doer, being unchangeable.]
There is nothing such thing as janma.

Prabhupada: Regarding your questions, second initiation is real initiation. First initiation is the preliminary, just to make him prepared, just like primary and secondary education. The first initiation gives him chance to become purified, and when he is actually purified then he is recognized as a brahmana and that means real initiation. The eternal bond between disciple and spiritual master begins from the first day he hears. Just like my spiritual master. In 1922 he said in our first meeting, you are educated boys, why don’t you preach this cult. That was the beginning, now it is coming to fact. Therefore the relationship began from that day. If you think of me and work for me, then I am in your heart. If you love somebody he is in your heart. The spiritual master accepts the sinful activities of his disciples from the first initiation. I may give initiation very easily, but what can I do? I am prepared to go to hell for service of Lord Caitanya.
>>> Ref. VedaBase => Letter to: Jadurani — New Vrindaban 4 September, 1972

Prabhupada: Regarding second initiations, I have become very concerned lately, that some of our older students who have been given the second initiation, have not been strictly following the rules and regulations. So from now on I want our presidents to be very sure about the devotees they are recommending to me for second initiation. I think sometimes in the past devotees have been recommended chiefly because some more helpers were required in maintaining the deity work. Of course, necessity is there. It is just like in government, the government has need for a number of men to fill important posts, but first the persons must be qualified before they can award the post. Even though there may be a pressing demand, first the man must be qualified. Our system is that after one year from the first initiation, if the devotee is strictly following our principles without deviation, and if he will sign a statement in seriousness, that he will not deviate from the chanting and regulative principles, then, on your mature consideration you can recommend him to me. It is not that we are stopping second initiation, but I want to be sure it does not become a farce and names be sent to me without proper qualification. We are criticizing the caste brahmanas for saying that the Americans and Europeans cannot be awarded brahmana initiation, because according to Vedic sastra, anyone who is properly trained up under a bona fide spiritual master, can become twice born. But if our brahmanas do not take their second initiation seriously, then we will be deserving of criticism.
>>> Ref. VedaBase => Letter to: Sahadeva — Honolulu 23 January, 1974