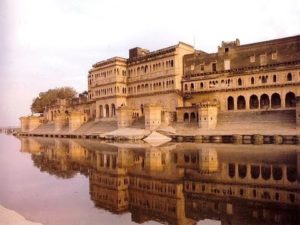 Since the first time I heard the name “Vrindavana” from my spiritual master I was struck by the desire to come and see Her. What I read about in the books was so extraordinary that I could not wait.

In 1975, when I was secretary of the Temple of Rome, a letter arrived from Srila Prabhupada asking all the devotees that had a qualification or even a natural tendency to study to come to Vrindavana because he was opening a university.
“A college, in Vrindavana,” I thought.
Nothing better, since I strongly wanted to come to Vrindavana and I was also inebriated by this world of wisdom. In particular, I wanted to study Sanskrit.

But the temple authorities, president and GBC, told me no, that Prabhupada, yes, wanted what he wrote but that he really wanted the devotees of each country to stay where they were to preach.
I was too young to protest against what was then called a “speculation”, that is, an invention contrary to the direct instructions of the spiritual master.
My life was destined to be another one because of that no.

Several years had to pass before I could get to Vrindavana.

On my first plane to Delhi, a senior devotee told me, “Look, Vrindavana is austere. The heat, the dust, the animals, the sewers. Do not flip out, you will like Mayapura better. “

When I arrived in Vrndavana it seemed to me that I had arrived in paradise. I liked everything, including sewers and mosquitoes. It was all so beautiful and transcendental that if I had to describe everything would require the pages of an encyclopaedia.
I thought,
“If I like Vrindavana so much, who knows how much I’ll like Mayapura.”

During the trip to Mayapura I was thinking of nothing but Govardhana and Yamuna.
When I got to Mayapura, I thought yes, it was fantastic, the eternal house of Lord Caitanya and his wonderful devotees, but I kept thinking about Vrindavana. I wish I was there.

In the following years I tried to return as much as possible and every time, even when I was visiting dream places like Haridvara or Rishikesha, I kept thinking about Vrindavana.

In the late 90s we thought of going to live in Jagannatha Puri. Also there the same feeling. Just a few weeks and we were back in Vrindavana.

Now I’m in Vrindavana and as I write I listen to the school children under the building where I have my little apartment reciting the verses of the Rig-veda. In the distance who knows which temple floods the atmosphere of devotional songs.

I’m in Vrindavana. Radha and Krishna are right here. I do not see Them but I know Thye are here. I’m sure of it.

You find all my books, articles, audio and video in the Archive.
Please subscribe