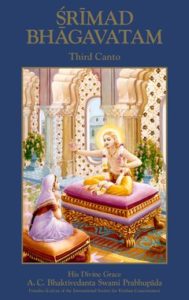 Teachings of Lord Caitanya
CHAPTER TWENTY-THREE
Why Study the Vedānta-sūtra?

…
Some Māyāvādī scholars argue that Śrīmad-Bhāgavatam was not compiled by Śrīla Vyāsadeva, and some suggest that the book is a modern creation written by someone named Vopadeva. In order to refute this meaningless argument, Śrīla Śrīdhara Svāmī points out that many of the oldest Purāṇas make reference to Śrīmad-Bhāgavatam. The first śloka, or verse, of Śrīmad-Bhāgavatam begins with the Gāyatrī mantra, and there is reference to this in the Matsya Purāṇa (the oldest Purāṇa). In that Purāṇa it is said about the Bhāgavatam that in it there are many narrations and spiritual instructions, that it begins with the Gāyatrī mantra, and that it contains the history of Vṛtrāsura. It is also said that whoever makes a gift of this great work on a full-moon day attains to the highest perfection of life and goes back to Godhead. There is also reference to Śrīmad-Bhāgavatam in other Purāṇas, which even indicate that the work consists of twelve cantos and eighteen thousand ślokas. In the Padma Purāṇa there is also a reference to Śrīmad-Bhāgavatam, during a conversation between Gautama and Mahārāja Ambarīṣa. The king was advised to read Śrīmad-Bhāgavatam regularly if he at all desired liberation from material bondage. Under these circumstances, there is no doubt regarding the authority of Śrīmad-Bhāgavatam. For the past five hundred years, since the time of Śrī Caitanya Mahaprabhu, many scholars have made elaborate commentaries upon Śrīmad-Bhāgavatam and have displayed unique scholarship. The serious student will do well to attempt to go through these commentaries in order to more happily relish the transcendental messages of the Bhāgavatam.
…

Was the Bhagavatam Composed by Vopadeva, and not Vyasadeva?
BY: HARI PRASHAD DAS

Translation of the above accusation:
“The composer of Śrīmad Bhāgavatam is a scholar named Vopadeva, who has also composed a grammar book named ‘Mugdhabodha Vyākaraṇa’. In Vopadeva’s writings, we get a proof of the fact that Vopadeva composed it. It is Vopadeva, who under the name of Vyāsadeva has composed this book. The famous author Bankimcandra also says in this regard that – ‘Many people consider the Bhāgavatam to be a creation of Vopadeva. Vopadeva was a minister of the assembly of King Hemadri of Devagiri. He appeared in the 13th Century A.D. However, many Hindus do not consider the Bhāgavatam to be a creation of Vopadeva. The vaiṣṇavas accuse that envious śāktas (followers of śaktī) have raised this misleading accusation. Whatever they may say, the fact remains that it was indeed Vopadeva, who composed the Śrīmad Bhāgavatam.”
Reply to the accusation:
Of course you are free to make any wild accusations, the insidious deceiver that you are. It’s not only you, but many more pot-smoking scholars of the universities of the west who make these wild accusations. If we reply to these accusations by saying that Ādi Śaṅkarācārya wrote the Govindāṣṭakaṁ based on the Bhāgavatam, the mundane scholars start doubting the authorship of the Govindāṣṭakaṁ itself. They start defending themselves by saying that it is not composed by Ādi Śaṅkarācārya.
Therefore, let’s show the proof of the Bhāgavatam by showing that it was quoted by Ādi Śaṅkarācārya’s guru, Śrī Gauḍapāda, in his commentary on a work known as Uttara-gīta:

If anyone wants to see the entire text of Uttara Gita, they can do so here.
The verse from the Bhāgavatam (10.14.4) is clearly quoted at the end of the second chapter.
It is clearly known that Gauḍapāda, the guru of Ādi Śaṅkarācārya was born much before Vopadeva, since Ādi Śaṅkarācārya himself appeared much before Vopadeva.
Vopadeva appeared in India around 13th Century A.D.
Another great piece of evidence is found in Ballāla Sena’s Dānasāgara, which will put a full-stop on this accusation. The Dāna-Sāgara (a composition glorifying charity), was composed around 11th Century. Ballāla Sena (the second ruler of the ‘Sen’ dynasty of Bengal) himself was born between 10th and 11th Century A.D.

The author of the Dāna-sāgara clearly says in this verse (no. 57) that he is not referring to the Bhāgavata Purāṇa in his composition because it does not contain the detailed glories of dāna (charity). This edition of Dāna-Sāgara is the critical edition published by the Asiatic Society in Calcutta.
So if references to Bhāgavatam can be found before 13th Century (the time of appearance of Vopadeva), how is it possible that Vopadeva composed the Bhāgavatam? So the accusation of the pot-smokers that the Bhāgavatam was composed by Vopadeva can be finally put to rest!

Vopadeva
VOPADEVA is a celebrated grammarian of India. He wrote a grammar entitled Mugdhabodha, which is held in high repute, especially in Bengal, and was commented upon by Durgadasa. (Both text and commentary have been edited at Calcutta in 1861; previous editions contain merely the text of Vopadeva’s grammar.) It differs from the great work of Pan’ini (q.v.) in its arrangement as well as in its terminology; and with out commentary of’ Durgadasa, would not yield by far the information that may be derived from Pan’ini’s grammar: It is valuable, however, on account of r..any later Sanskrit formations, that could not be contained in the older work. Vopadeva com posed also a catalogue of Sanskrit dlultus, or so-called radicals, in verse, called Karam: padruma, (published at Calcutta, 1848), and a commentary on it, the Kiieyakeimadhenu. Another grammatical work, the Reimavyak,arani a, is likewise attributed to his authorship. According to a general tradition prevalent in India, Vopadeva would also be the author of one of the most renowned Puran’as (q.v.), the BMgavata-Purcini a; and
in a little treatise, the Durjanarnukha-chapetiika, or “a slap on the face of the wicked,” which is averse to this tradition, and maintains that Vyasa (q.v.) was the author of this Puran’a, three other works of a religious character are assigned to Vopadeva,—viz., the Paramahansapriya, MUlthiphala, and A little medical work, the S’a,:as’lo kachandrikd though written by a Vopaveda (see prof. Aufrecht’s Catalogue of the San skrit MSS. of the Bodleian Library), does not seem to belong to the. author of the works just mentioned. The date of Vopadeva, given by some as the 12th, by ()theca as the 13th C.
after Christ, is, according to Burnouf’s investigation, the second half of the 13th century. —See E. Burnouf’s preface to his edition, and French translation, of the first nine books of Le Blaigarata Puran’ a, vol. i. (Paris, 1840).