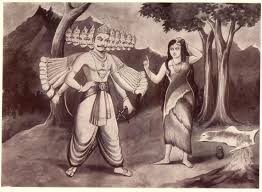 Vedavati was born in a family of two rishis, Dharmadwaja and Khushadwaja. They were ardent devotees of Devi Lakshmi. The birth of baby girl by the wife of Kushadwaj was so auspicious that were chanting anf reciting vedas all around at the time of her birth and so she was named Vedavati.

This Vedavati was actually incarnation of Devi Lakshmi. She grew up as a young lady with the sole desire and purpose to marry Visnu. She started performing penances for it.

One day a voice echoed in sky and announced to her that she will attain her goal of marrying Visnu in his next avatar and for now she can stop doing any further penances.

However Vedavati was determined to her goal and she started performing harder . While she was under her penances , Ravana visited her and became mesmerized by her ethereal beauty instead of purity of intentions in the hospitality offered by her. He develops passionate thoughts for her and tried to violate her. This angers Vedavati and under her tapas yogic power she curses this man that he and his entire family will one day be destroyed for her sake. She leaves her body with her yogic power.

The Vedavati of pure character takes rebirth as Sita, the soul of Vedavati had the mission of marrying Sri Vishnu which she achieves by marrying Vishnu’s incarnation – Sri Ramamacadra. She had no remembrance of sever penances and austerities she has performed in her previous life as Vedavati.

Then one day Sita gets Kidnapped by Ravana which is the same man who desired Vedavati and earned her curse due to which Sita eventually becomes the reason for destruction of entire clan of Ravana.

When Sit’s ordeal by fire came , Lord Agni handed over the real Sita to Ramacandra. She also took a rebirth as Draupadi.

She was #Vedavati in Satya yuga, Sita in Treta Yuga and Draupadi in Dvapara Yuga.

Note:
The story in incomplete. We’ll complete it as soon as possible