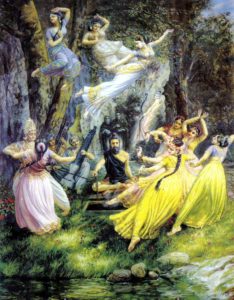 Hare Krishna GuruMaharaja. Please accept my humble obeisances. All glories to Srila Prabhupada !!!
GuruMaharaja hear that the spiritual master does not return to the spiritual world until all his disciples have gone back. Is that correct?

The relationship between a bonafide spiritual master and his disciples is spiritual and therefore doesn’t end with the exit (of us spirit soul) from this body.
Srila Narottama Dasa Thakura writes and sings the following verse:
cakhu-dan dilo jei, janme janme prabhu sei
divya-jnan hrde prokasito
“He opens my darkened eyes and fills my heart with transcendental knowledge. He is my Lord birth after birth.”
Janma janma means more births, not just one.

The Guru will continue taking birth until all his disciples are gone back to Godhead.
Howeven Guru is one, Guru is Sri Baladeva, Guru is Sri Nityananda Prabhu. All spiritual masters are Their representatives and accept disciples with the idea that they do it in that capacity.
This doesn’t in any way mean that the Guru and the Sisya have not a personal relationship. They do have a personal relationship. However, just like Hridaya Caitanya Prabhu sent Sukhi Krishnadas to Srila Jiva Gosvami to act as a Siksa Guru to his disciple because he was vastly more erudite, the Guru may choose another person, a friend of his, to finish what he has started, namely accompany his disciples in their last steps back to Goloka Vrindavana.
Therefore Guru is one and many at the same time.

I never read or heard directly from Srila Prabhupada that it’s mandatory, meaning part of his service towards his disciple, that the Guru will have to continue to take births to personally deliver his disciples. If someone has such a quote I’ll be happy to be informed of.

During the years I heard devotees saying that Srila Prabhupada said that the Guru has to come back untill his disciples are liberated, but I was never shown any pramana (evidences). We accept only three pramanas as indubitable and absolute: Guru, Sastra, Sadhu. Everyone else is welcome in our minds but we have the right to be respectfully doubtful, which is called samsaya, rightful doubt.
A devotee once wrote:
“I was coming and going, as my small baby kept making noise. Then a devotee asked a question: ‘In the guru-puja song we sing, ‘You are my spiritual master life after life.’ Srila Prabhupada, does this mean that if we don’t make it this lifetime you will come back to save us?’ You answered firmly, banging your fist on the little bookstand before you, ‘You make it this lifetime, don’t make me come back.’
It may be true, I am not saying is false, but again, pramana, prove it to me.
This samsaya grew up in us during the years, when we discovered the unfortunate phenomenon of devotees saying things that Srila Prabhupada said that Srila Prabhupada never said. It may sound funny, but it’s not.