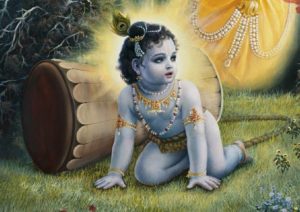 Translation
That which pervades the entire body you should know to be indestructible.
No one is able to destroy that imperishable soul.

Purport
This verse more clearly explains the real nature of the soul, which is spread all over the body. Anyone can understand what is spread all over the body: it is consciousness. Everyone is conscious of the pains and pleasures of the body in part or as a whole. This spreading of consciousness is limited within one’s own body. The pains and pleasures of one body are unknown to another. Therefore, each and every body is the embodiment of an individual soul, and the symptom of the soul’s presence is perceived as individual consciousness.
This soul is described as one ten-thousandth part of the upper portion of the hair point in size. The Śvetāśvatara Upaniṣad (5.9) confirms this:
bālāgra-śata-bhāgasya
śatadhā kalpitasya ca
bhāgo jīvaḥ sa vijñeyaḥ
sa cānantyāya kalpate
“When the upper point of a hair is divided into one hundred parts and again each of such parts is further divided into one hundred parts, each such part is the measurement of the dimension of the spirit soul.”

Similarly the same version is stated:
keśāgra-śata-bhāgasya
śatāṁśaḥ sādṛśātmakaḥ
jīvaḥ sūkṣma-svarūpo ’yaṁ
saṅkhyātīto hi cit-kaṇaḥ
“There are innumerable particles of spiritual atoms, which are measured as one ten-thousandth of the upper portion of the hair.”

Therefore, the individual particle of spirit soul is a spiritual atom smaller than the material atoms, and such atoms are innumerable. This very small spiritual spark is the basic principle of the material body, and the influence of such a spiritual spark is spread all over the body as the influence of the active principle of some medicine spreads throughout the body. This current of the spirit soul is felt all over the body as consciousness, and that is the proof of the presence of the soul. Any layman can understand that the material body minus consciousness is a dead body, and this consciousness cannot be revived in the body by any means of material administration. Therefore, consciousness is not due to any amount of material combination, but to the spirit soul.
In the Muṇḍaka Upaniṣad (3.1.9) the measurement of the atomic spirit soul is further explained:
eṣo ’ṇur ātmā cetasā veditavyo
yasmin prāṇaḥ pañcadhā saṁviveśa
prāṇaiś cittaṁ sarvam otaṁ prajānāṁ
yasmin viśuddhe vibhavaty eṣa ātmā
“The soul is atomic in size and can be perceived by perfect intelligence. This atomic soul is floating in the five kinds of air (prāṇa, apāna, vyāna, samāna and udāna), is situated within the heart, and spreads its influence all over the body of the embodied living entities. When the soul is purified from the contamination of the five kinds of material air, its spiritual influence is exhibited.”
The haṭha-yoga system is meant for controlling the five kinds of air encircling the pure soul by different kinds of sitting postures – not for any material profit, but for liberation of the minute soul from the entanglement of the material atmosphere.

So the constitution of the atomic soul is admitted in all Vedic literatures, and it is also actually felt in the practical experience of any sane man. Only the insane man can think of this atomic soul as all-pervading viṣṇu-tattva.

The influence of the atomic soul can be spread all over a particular body. According to the Muṇḍaka Upaniṣad, this atomic soul is situated in the heart of every living entity, and because the measurement of the atomic soul is beyond the power of appreciation of the material scientists, some of them assert foolishly that there is no soul. The individual atomic soul is definitely there in the heart along with the Supersoul, and thus all the energies of bodily movement are emanating from this part of the body. The corpuscles which carry the oxygen from the lungs gather energy from the soul. When the soul passes away from this position, the activity of the blood, generating fusion, ceases. Medical science accepts the importance of the red corpuscles, but it cannot ascertain that the source of the energy is the soul. Medical science, however, does admit that the heart is the seat of all energies of the body.

Such atomic particles of the spirit whole are compared to the sunshine molecules. In the sunshine there are innumerable radiant molecules. Similarly, the fragmental parts of the Supreme Lord are atomic sparks of the rays of the Supreme Lord, called by the name prabhā, or superior energy. So whether one follows Vedic knowledge or modern science, one cannot deny the existence of the spirit soul in the body, and the science of the soul is explicitly described in the Bhagavad-gītā by the Personality of Godhead Himself.