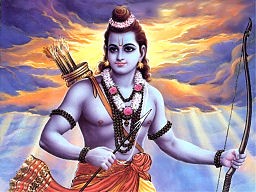 One day, accompanied by his disciple Bharadvaja, the Rishi Valmiki went to the banks of the Tamasa River, not far from the Ganges. The water was crystal clear and a gentle breeze cooled the air. The atmosphere was lovely. So, he decided to stop there for his daily ablutions. As he got ready, he admired the verdant forest behind them, which made the landscape idyllic. How much peace! And how much beauty! «What an artist the creator of all things must have been!» he thought.

On one of the branches of the tree there was a pair of birds frolicking. The sage looked at them, meditating serenely. Suddenly, the unexpected tragedy: an arrow shot by a hidden hunter pierced the male, who fell dead. His partner seemed mad with grief, so much so that she couldn’t even escape, and ran the risk of being killed too. Valmiki watched the dramatic scene and felt a deep sorrow for the birds, so violently snatched from their happiness. Then, he felt an uncontrollable anger springing from his heart, and he decided to curse the hunter. Loudly, in order to be heard, the sage said:

“You hit two birds as they mated, and for this ignoble deed you will never get any fame.”

The hunter fled in fear, fearing other curses. As he watched him flee, Valmiki paused thoughtfully. Something had hit his mind. The curse, how had he pronounced it? How had he expressed his pain? Involuntarily, he had expressed his anger in perfect verse, in a symmetrical and rhythmic expression that could also be recited in music. In the days that followed, he thought for a long time.

“This expression that I have unwittingly created is wonderful. It seems made to recite poems even in music. I will spread its use all over the world, and since it was born from my shoka (pain), its verses will be called shloka.”

Since then, the major sacred texts have been written in shlokas.

This is a section of the book “The Ramayana”.