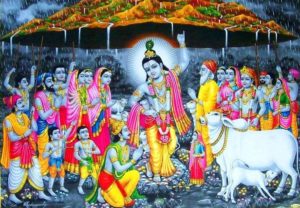 A good action is called sukriti and can be consciouss (jnata sukriti) or uncosciouss (ajnata sukriti).
In the first case one knows and wants to be doing something good and in the second case he doesn’t know.

What is ajnata-sukriti?
Srila Prabhupada said:
“They make some advancement without knowing it.”
For instance one may casually be fasting or not eating grains during Ekadasi and still be getting benefits. Or buying books from devotees. Or a flower picked up and offered to Krishna.
Or to offer milk of terribly mistreated cows. Vegan devotees do not want to take milk because the cows are mistreated, and that is true. However taking milk offered to Krishna is the only way we can actually help these cows. They will get spiritual advancement through ajnata-sukriti. If we do not offer their milk we condemn them to suffer and die with no hope.

Obviously jnata-sukriti is better because in the act of giving there is some devotion.

In the case we are discussing, that person will get spiritual benefits only if that money will be spent in pure devotional service.
Otherwise he will get only some material benefits.