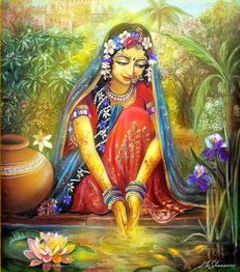 In CC Adi 1.5 it is said “The loving affairs of Sri Radha and Krishna are transcendental manifestations of the Lord’s internal pleasure-giving potency. Although Radha and Krishna are one in Their identity, They separated Themselves eternally”. Srimati Radharani, as the highest devotee of Sri Krishna, derives the greatest pleasure in serving Him. She is the origin of all the Gopis and of all the Goddesses of Fortune (Lakshmi devi) who are engaged in the service of the Lord. She is the mainstay, the ideal and the ultimate refuge of all devotees embarking on the path of devotional service. Without first getting the mercy of Srimati Radharani it is impossible to even approach Sri Krishna.

The Hare Krishna maha-mantra is in fact a prayer to Srimati Radharani. The word ‘Hare’ is derived from ‘Hara’ which denotes the internal energy or Hladini Sakti of Krishna. This is none other that Srimati Radharani. When one is chanting the maha-mantra, one is saying: “O Krishna ! O Radha !! Please engage me in your devotional service”. Krishna is difficult to approach directly, but He is bhakta-vatsala, always eager to please His devotees. Thus the mood of a devotee is to invoke the compassion of Srimati Radharani Who then recommends the devotee to Sri Krishna. Since Krishna is easily pleased by Srimati Radharani, He then readily accepts the devotee in His service.

When the Lord descends, He is invariably accompanied by His loving associates. Five thousand years when Sri Krishna descended in His original form, as a cowherd boy in Vrindavan, Srimati Radharani accompanied Him in Her original form. She appeared exactly two weeks after the appearance of Sri Krishna on the eighth day of the waning moon (ashtami). Srimati Radharani was found on a lotus flower by Vrashabhanu and his wife Kirtida near the village of Barsana, a few miles away from Nandagrama. It is said that Srimati Radharani first opened Her eyes only when Sri Krishna appeared before Her. Until that time Her eyes were closed.

Understanding the mellows of the relationship between Krishna and Radha is impossible from the mundane perspective. Understanding madhurya-rasa (devotion at the platform of intimacy), which is the highest level of relationship of a devotee with Krishna, is only possible in the most elevated stages of bhakti where there is not even a tinge of material contamination. Therefore Svarupa Damodara Gosvami has written: “The loving affairs of Radha and Krishna are not ordinary, material loving affairs, although they appear like that. Rascals and fools misunderstand Krishna to be an ordinary man. They do not know Krishna’s transcendental nature. They try to imitate Krishna’s rasa-lila, His dancing with the Gopis”. There is no offense greater than this. Devotees starting on the path of bhakti must carefully avoid such offenses. They must simply pray to Srimati Radharani, as their most compassionate Mother, for mercy, for bhakti and for an opportunity to serve Sri Krishna.

All glories to Srimati Radharani !!