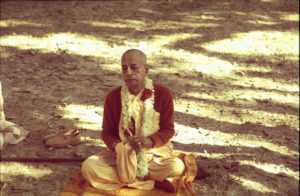 Dear devotee,
thanks for the sensitivity to write to me privately, thus giving me the possibility to open my mind more. However in the past some private letters of mine were sent to everyone so I have decided to do not give different answers, private or public. Everything has to be public.
If I have something to say that I don’t want to be public, I’ll simply keep it for myself and not say anything to anyone.
And as a consequence, in my answer I’ll not mention your name.

In a prevous article I wrote “I think Srila Prabhupada’s holy body should have been handled differently”, refers to the fact that there is a video where the devotees up on the pitch handed over Srila Prabhupada’s body to the devotee down the pitch without having tied the body to a solid asana and pole. Without this, Srila Prabhupada spiritual body fell here and there like a mannequin. That was a horrible sight for me, it broke my heart, and for this reason I never again watched those videos, nor I think anybody should watch them.
Just like we tie any Deity when we invite Them to a public Darsana, like in Ratha Yatra, Srila Prabhupada transcendental body should have been tied, lowered and then untied.

For the rest of the Samadhi ceremony, I wasn’t there so I don’t know how it was performed, nor at that age I would have been able to help doing it any better.

About the “last rights”, I am not sure to understand what you are refering to. If you are refering to Srila Prabhupada’s “last will”, I’ll not discuss my thoughts.
If anyone asks me to comment about important subject matters, who have an impact on our movement daily life, I can discuss any of them from the purely philosophical point of view. I have a scarce interest over the implications that these topics have in our society.